Men’s ice hockey moves up to No. 1 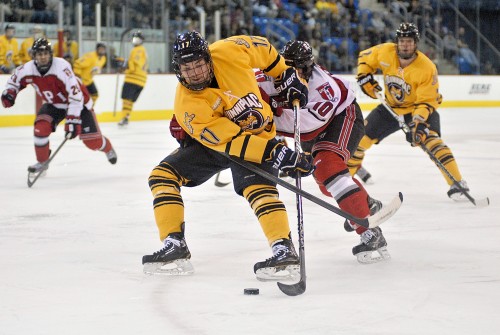 The Quinnipiac men’s ice hockey team has risen to the No. 1 spot in this week’s USCHO.com poll. This is the first time in the history of the program they have taken the top spot.

After receiving 20 first place votes in last weeks poll, the Bobcats received 41 in this week’s after beating Cornell and Colgate on the road this weekend. Previous No. 1 Minnesota fell to No. 2 in this weeks poll after losing to St. Cloud State 4-3 on Saturday.

Quinnipiac is also No. 1 in the PairWise rankings as well as the KRACH rating system.

The Bobcats are currently on a 21-game unbeaten streak, the longest streak in the nation. Their last loss came more than three months ago when they were defeated by American International 2-1 on Nov. 6.

Quinnipiac has already earned a guaranteed bye in the ECAC Tournament with its 14-0-2 conference record and can finish no worse than second.

Goaltender Eric Hartzell has been a big part of the Bobcats success this season winning 21 games to lead the nation. He is also seventh in save percentage at .936 and tied for second in shutouts with four.

Hartzell’s play with the help of his defense has led the Bobcats to the No. 2 defense in Division I hockey allowing 1.57 goals per game. The team is also tied for 19th in offense scoring 3.00 goals per game.

The team will return home for the first time since Jan. 22 and open a four-game homestand on Friday when they host St. Lawrence. They will then take on Clarkson on Feb. 16 before playing Yale and Brown the following weekend. They will then finish their regular season play on the road the first weekend of March traveling to Harvard and Dartmouth.