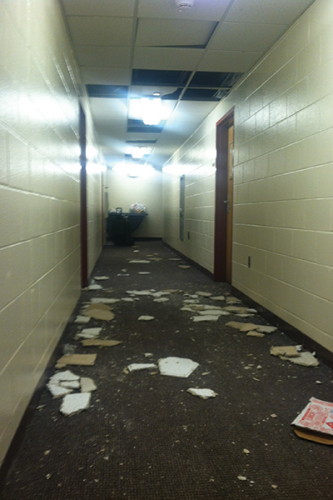 Commons residence hall has faced numerous acts of vandalism including broken ceiling tiles, smashed windows and torn hallway decorations, according to residents and resident assistants. Residents say it is beginning to negatively affect the image and reputation of the residence hall.

[/media-credit]“Vandalism is something we see now and then, not something we see everyday or every weekend,” Chief of Public Safety David Barger said. “Vandalism has been greater this year in Commons vs. other years. We have gone semesters, and even years, without ceiling tiles being punched out.”

“Vandalism negatively reflects on all the students who live in Commons,” Barger said. “It gives students a negative connotation that goes along with them.”

The most expensive acts of vandalism were smashed-in ceiling tiles this past fall semester, according to Barger. A few tiles on the first and third floor, along with most of the tiles on the second floor, were broken into pieces and left on the hallway floors.

“Ceiling tiles rarely need to be changed,” Associate Vice President for Facilities Operations Keith Woodward said. “A ceiling tile only needs to be changed if they were damaged somehow, either through vandalism or perhaps a leak.”

This past weekend, students were brought in for questioning about the incident after other students came forward with information. Barger has confirmed that several students have been identified who were responsible for these damages. These students will now have to go through the process of facing residential life and the judicial board. According to Barger, the punishment for these students has not yet been decided.

First floor Commons resident Maria Mucci saw a few broken tiles by her room. Mucci believes that the resident assistants are not at fault in these situations; however, she is getting frustrated.

“Allegedly there were witnesses who said that boys were destroying the tiles, so I do not have to pay,” Mucci said after talking to her resident assistant. “I feel that the RAs do a poor and inefficient job controlling the students who live in Commons, especially the boys.”

“I feel that it gives Commons a bad reputation, especially the second floor,” Lynch said. “These acts of vandalism reflect on the whole floor as a whole. We are not all like this, it is disrespectful,  we are adults. We should be living in a better environment.”

Decorations are also regularly torn down in Commons. Both Lynch and Mucci have had name tags ripped off their door. Mucci also noted seeing inappropriate words written on whiteboards and cork boards, as well as seeing her resident assistant’s hall decorations being written on or torn down.

According to Barger, this is considered vandalism.

“Vandalism is whenever someone intentionally damages someone else’s property. It is criminal mischief,” Barger said.

Waking up on a Saturday or Sunday morning, Commons residences can find an assortment of trash thrown in the hallways – ranging from Chinese food, red Solo cups, pizza boxes and empty food wrappers. Mucci says the littering in Commons is “out of control.”

“When you litter you are being a bad neighbor,” Barger said. “You should respect your neighbors and the people around you.”

Lynch added, “The worst thing about all this trash is how much our cleaning ladies have to clean.”

Mucci noted that the peepholes were removed and stolen in January.

“It gives people a clear view into the room. When you look through the hole now, you can see pretty much my entire room,” Mucci said. “ It gives boys the opportunity to peek into girls’ rooms.”

Commons resident Cari Gaynes and her roommates recently had a window broken. The girls noted that they were in the room next door when they heard a noise, followed by boys shouting and running. It was not until the next day, when Gaynes went to open the window, that she saw broken glass on the window sill, as well as outside on the sidewalk.

Gaynes and her roommates put in a work order, which was immediately attended to.

“There have been tons of issues in Commons [this academic year], but it adds to the college experience in a way,” Commons resident Alexandra Wile said. “There has been a lot of vandalism which is sad, but hopefully by the end of the year people will realize not to vandalize our building.”