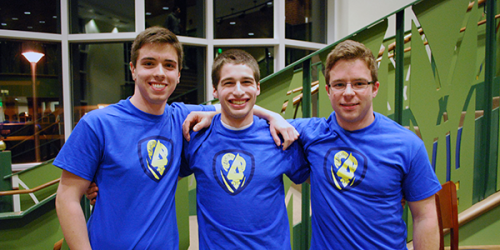 Another year, another rush week. This time, Quinnipiac adds new fraternity Delta Upsilon to the mix. 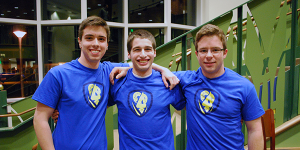 [/media-credit]Delta Upsilon, the world’s oldest non-secret fraternity, is an alternate for students who are skeptical about the secrecy of rituals in fraternities on campus. The fraternity’s mission and principles are open to the public, as are the ceremonies and rituals.

“It’s something we take pride in,” said Sean FitzGerald, expansion consultant for Delta Upsilon. “It might not appeal to everyone but I know that for my own experience being able to include my family in the process was very important to me.”

Sophomore Steven Braun accepted the bid to be one of the Founding Fathers for the new chapter last week because he believes in its values.

“I mean, honestly, that’s a pretty cool thing,” Braun said. “I can bring my parents to initiation without having to send them off into another room. They’re so excited.”

The fraternity focuses on “building better men” and community service. Through its philanthropy, Global Service Initiative, members go on four trips to build schools in Jamaica and one trip to help with disaster relief in New Orleans. This emphasis makes Quinnipiac the “perfect fit” for Delta Upsilon, according to Director of Expansion Mark Gehrke.

“Quinnipiac offers a lot of opportunities for students to go abroad, do service and have a global experience, and that’s part of Delta Upsilon’s core foundation,” Gehrke said.

FitzGerald, who graduated last year from the University of Michigan, went on one of these seven day immersion trips to Jamaica. 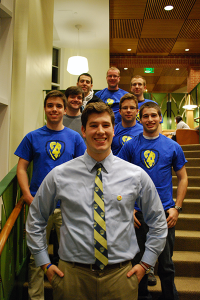 [/media-credit]“I got together with 20 other brothers from across the United States and Canada,” FitzGerald said. “I knew maybe one or two of them previously from conferences but you already knew there was a connection there, that shared set of values. You knew them before you met them.”

Delta Upsilon’s philanthropy continues to grow and they are working towards getting whole groups from each chapter to go on each of the five trips.

FitzGerald says Delta Upsilon is dedicated to global awareness and community engagement, whether through service or just on-campus interactions, and their non-secret practices and open brotherhood helps them to further engage the community.

“Whether it’s the interactions you have with your brothers or with the educational programming we offer or the service opportunities we offer, all of these are meaningful experiences that build better men and help prepare you to be a global citizen,” FitzGerald said. “That’s what we’re all about these days.”

Braun says he is both excited for and intimidated by colonizing and establishing Delta Upsilon at Quinnipiac.

“It’s exciting but it is a little intimidating having to build something from scratch,” Braun said. “But [FitzGerald] is here and Kappa Delta has done it and they’re very successful so I imagine we’ll probably use them as a model.”

FitzGerald will remain a presence at Quinnipiac through the colonization ceremony in March and into mid-April.

“Quinnipiac is an up-and-coming university and it’s going to continue to grow,” FitzGerald said. “This Greek community is very welcoming and I think they’re excited to see a new fraternity on campus that’s willing to engage in this community as well and bring Greek Life up as a whole here.”

During the past five years, the Greek community at Quinnipiac has grown from 411 students to more than 1,300 by the end of last year, according to Courtney McKenna, Associate Director of Student Center and Campus Life.

McKenna says she is not surprised by the trend, as students are looking for academic support and leadership opportunities.

“[Students] are looking for opportunities to give back and make the world a better place for all and a set of shared principles and values by which to live their lives,” she said. “Fraternities and sororities provide all this not only during the collegiate years, but for life.”

McKenna says the addition of Delta Upsilon will help students find these opportunities and bring something new on campus.