Two ‘hot guys’ from QU give advice in Seventeen Magazine 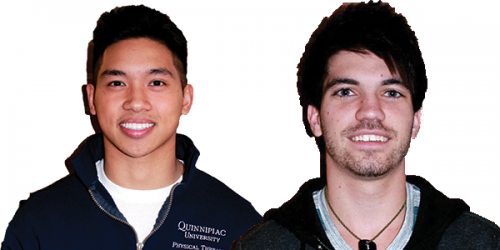 Quinnipiac students may see some familiar male faces noted for their good looks when picking up this month’s issue, as well as future 2013 issues, of Seventeen Magazine.

Seniors Joe Mauti, 21, and Ernest Eusebio, 20, were chosen for “The Hot Guy Panel,” an annual feature in Seventeen Magazine where 10 guys under the age of 21 give dating advice to readers for the entire year. Stephanie Osmanski, an intern for the magazine last semester, suggested they apply.

“They’re both two good looking young guys who are very insightful, caring and good advice givers. That’s exactly what this job requires, so I thought they’d be perfect,” Osmanski said.

Eusebio, who’s from Bogata, N.J., is a physical therapy major and currently single. He said the application process was long and asked a lot of questions about topics he doesn’t like discussing, such as ex-girlfriends and “all that smushy stuff.”

After being selected Mauti and Eusebio attended a photo shoot in New York City, where they met each other for the first time on the tour bus to Central Park, where the photos were taken.

“I had never been to the Hearst Tower before, and it was really cool inside and it looked great because there are other huge magazines there like Esquire,” Eusebio said. “We walked down to Central Park and took photos with the other guys who were going to be on the panel. It was really cold!”

Mauti is from Middletown, N.J., and a marketing major. He said being in the spotlight without his band, Beneath The Sun, was a different experience.

“I don’t like being center of attention, ever, so having to do that for a while was out of my comfort zone, but it was fun,” Mauti said, who plays bass and will continue to do shows after graduating this semester. He’s also single.

Mauti said the October 2012 photo shoot in Central Park was an intense, all-day event with a lot of professionals from Seventeen, including photographers and editors.

“But I have done similar stuff with band photo shoots,” Mauti said. “I am very happy I did it, and I met a lot of cool people, but it isn’t something that I see myself doing in the future.”

Eusebio and Mauti also engage in Twitter discussions with Seventeen fans, so girls are encouraged to Tweet at them and ask them questions. There are also scheduled hashtag discussions under “#17hotguys,” providing interviews for print and online editions of the magazine.

Eusebio didn’t have a Twitter or Instagram account before the photoshoot. But, the editors at Seventeen Magazine told him to have one once the February issue debuted, which features Ke$ha on the cover. Eusebio said he gained recognition instantly, citing a cashier at a convenience store down the road from his house.

“I didn’t understand it all until the Internet sneak peak came out and I went from 50 followers to 100 and then 200 in one day,” Eusebio said. He currently has 507 followers on Twitter and is asked for advice everyday.

Mauti, a member of the fraternity Delta Tau Delta, was more nervous about giving advice.

“I try to respond to as many as possible,” Mauti said. “It’s kind of scary though because if I say something wrong or what I think is funny and they don’t find humor in it and end up having a bad experience, it is my fault.”

Both Eusebio and Mauti recently gave advice about texting do’s and don’ts in a video on Seventeen’s website.

“The kind of texts that make me smile from a girl are definitely the random ones out of nowhere,” Mauti said.

Eusebio felt similar and said he likes texts at the most random part of the day, especially when he’s busy because it’s a nice distraction from what’s consuming his day.