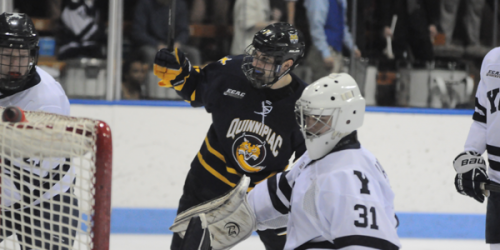 Eight years in the ECAC, and they’re still commonly overlooked by Yale.

Eleven conference victories and 24 points later throughout 2012-13, No. 2 Quinnipiac entered Ingalls rink Saturday evening with something to prove against the two-time ECAC champions and No. 8 Bulldogs. 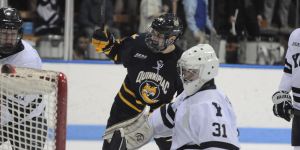 Following two quick Yale goals in the first seven minutes of play, Quinnipiac rattled off six unanswered, defeating the Bulldogs and winning round one of the War for Whitney Ave., 6-2. With the win, Quinnipiac extends its unbeaten streak to 19-games, while also improving to 12-0-2 in league play.

“We’re thrilled with the victory tonight,” Quinnipiac head coach Rand Pecknold said. “I thought the atmosphere in the rink was electric. Both teams competed and played hard tonight. For us, it’s all about the PairWise.”

“Our confidence as a team has been excellent,” goaltender Eric Hartzell said. “Everyone shows up to practice ready to work every day, and that’s the biggest reason for all of this.”

Coming into the contest, Quinnipiac had the fourth best penalty kill in the country with a percentage of 90.1. Yet, that didn’t stop Yale from opening the night with a pair of power-play goals at 2:53 and 6:45. Trent Ruffolo grabbed a loose rebound in front, before beating Hartzell backhanded for the 1-0 advantage. The latter goal came off the stick of Stu Wilson, who batted home a mid-air rebound.

Yet, Quinnipiac remained patient, later striking twine in the 12th minute of the first while playing 4-on-3. Federico connected with Mike Dalhuisen across the point, who then rifled a shot past Maricic, cutting Yale’s lead to one. The Bobcats hit the back of the net again with 1:51 remaining in the stanza, when Cory Hibbeler sniped out a shot from the far side circle.

Quinnipiac’s offensive attack continued in the second, tallying an additional two goals to their credit. At 10:13 on the power play, Matthew Peca ripped a shot from the near side boards to push the Quinnipiac lead to one. Then, in the 16th minute Ben Arnt punched one past Maricic in a scrum in front of the crease to give the Bobcats the 4-2 lead.

“It’s just one of those games where you have to control your emotions,” Peca said. “I think we handled it pretty well. We were a little more disciplined as the game went on. We know we have a lot of character in the room, and we don’t get down from deficits.”

Following the replacement of Maricic for Yale backup Connor Wilson, Quinnipiac added another two scores in the final 20 minutes of play. At 12:10, Kellen Jones picked up a loose puck by the hash marks, snapping it across the crease for a shorthanded goal. 5:19 later, Davies punched the puck off Wilson and in for the Bobcats sixth straight goal.

The Bobcats hit the road next weekend to take on Cornell and Colgate.