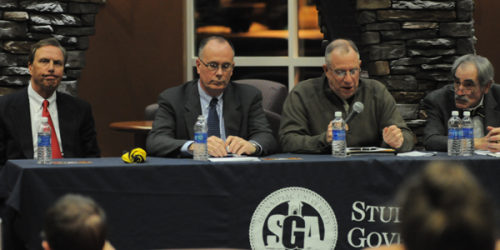 President John Lahey highlighted plans to move the Law School to the North Haven Campus beginning next summer, making it a graduate campus. He also discussed additional changes to Quinnipiac in the State of the QUnion with other administrators last Wednesday night. 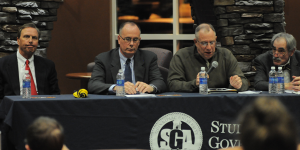 [/media-credit]“Certainly the high point of the year was the accreditation of our new medical school,” Lahey said. “It is a very significant development in terms of Quinnipiac’s standing … and the ultimate value of your degree.”

In the summer of 2014, the School of Law will move to the North Haven Campus, Lahey said. This will enable the Law School building on the Mount Carmel Campus to be used for undergraduate classes, clubs and studying, he said.

“The Law School building will be the equivalent of building three Echlin Centers or three Lender Center Buildings,” he said.

Lahey suggested that by moving graduate classes to the North Haven Campus, there will be more parking available on the Mount Carmel Campus.

With the growing student population, the administration is also looking at increasing the number of Residence Halls on the Mount Carmel and York Hill campuses, especially for seniors.

“Most of the growth in the future is going to be at the graduate level, but we are committed to building more dormitories [and] Residence halls, particularly for seniors, to get more seniors on campus,” Lahey said. “Any feedback … the student body can give us as to where and what type of residence halls would be most attractive … would be very helpful to us.”

Lahey also explained that he hopes to expand into Hamden and give the area a “more collegiate look.”

“We’re looking to acquire Ives Street up to Mount Carmel,” Lahey said. “We would like to acquire as many things that makes sense to us. We are having active discussions with private developers to build a more collegiate inn there.”

Lahey predicted that as the economy picks up, there will be more retail places and restaurants where students can use their QCard.

Among the main concerns students raised at the panel was the university’s shuttle system. Chief Barger said that the university is working with Dattco buses to develop a TransLōc system, which will allow students to track the shuttles on their smartphones. Barger also wants to create a new radio system for the buses to use to increase communication.

Additionally, students asked the panel about campus safety. According to Barger, the university is prepared for emergencies with the RAVE alert system, which sends students a text message containing important information. Barger also said that the Hamden Police Department knows the layout of the university to protect students in case of an emergency.

Barger also emphasized Public Safety’s escort system, where students can dial extension 6200 to be accompanied by a Public Safety officer back to their residence hall if they feel unsafe.

Students also asked about how the university dealt with Hurricane Sandy. Barger explained that the university’s Emergency Management Team worked on a “day-by-day basis” to determine when the school would have power again to reopen.

However, Thompson admitted that there were flaws with the university’s reaction to Hurricane Sandy.

“Looking back there are things we could have done differently,” Thompson said. “Going forward, if we have a similar event, [we should] commit to particular times on each day where at least some communication goes out [to students], even if it is just to say there is no new information.”
The panel further emphasized that they want to keep communication open between students and administrators.

“My best day is when I have an interaction with a student,” Thompson said. “Please don’t be bashful about letting us know what your needs are. Don’t suffer in silence … ”

Lahey believed that the State of the QUion was a great way for administrators who do not generally work with students to communicate with them.

“I do think these kinds of forums are important because there aren’t as many opportunities for the rest of us (administrators), to have more direct contact with students,” he said.

Freshman Emily O’Neil was pleased with the event.

“I think they covered … a lot of the issues that students would be concerned with,” she said. “I think it really lets you know what is going on with the entire school.”