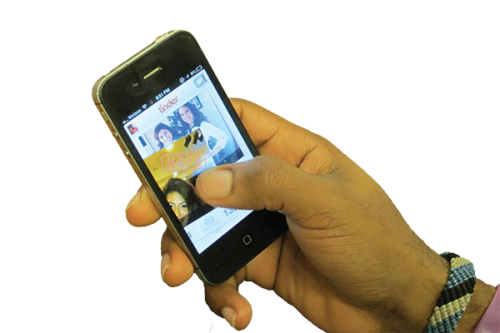 Tinder app's popularity is growing on college campuses and the community.

Tinder App for smartphones seems to be the newest rave on college campuses and the larger community. Anyone can create a profile on the matchmaking device by using their Facebook pictures. People can anonymously “like” people’s profiles, and if their photos are “liked” back, each is notified of the match. Users can “swipe” through thousands of profiles, and if they don’t like what they see, they keep on “swiping.”

“TInder is beyond creepy because unlike Facebook where you can control who sees your profile, anyone is free to look,” freshman Shana Maglio, 18, said.

The app is becoming popular at Quinnipiac, and Freshman Greg Mayer, 19, is enticed by Tinder because he’s granted anonymity upon his first “like” on a stranger’s photo.

“It’s not like a Facebook ‘like’ where it’s weird if I’m the first one to like it,” Mayer said. “It’s a mutual interest when you find out whether they liked you back or not.”

Freshman Tyler Melanson said he prefers Tinder to Facebook because it gives him the chance to meet people both in and out of the Quinnipiac community.

“Through Facebook you don’t get randoms,” Melanson said. “I have never seen most of these people before, and I see new people every time that I will hopefully meet in the future.”

Tinder also lets users create a radius to find people in the area and not in another state, for example. That way the chances of meeting up are greater. While Melanson was swiping through profiles, he came across a few people he recognized from Quinnipiac.

This can be convenient for users because if they “like” someone from Quinnipiac’s profile, and they get a “like” back, their match may down the hall, Melanson said. But if they aren’t interested, there are no hard feelings because the other person won’t know.

Mayer also said the app is useful for people “who are busy, because you can do it whenever you are on the go or whenever you have some free time. It’s speed dating.” Mayer said he would consider meeting up with a match, but he hasn’t had one yet.

Meeting matches in person has some critics arguing that Tinder is potentially dangerous. People could make fake profiles and pretend to be someone else, putting others at risk if they choose to meet in person.