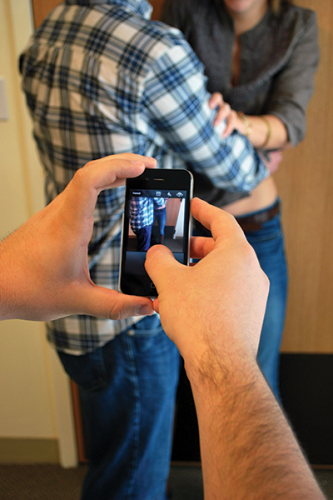 In August 2012 in Steubenville, Ohio, an inebriated girl laid on the floor, her body unresponsive and her mind unconscious. Two Steubenville High School football players removed her clothes, dragged her by her wrists and ankles, snapped a photo, put it on Instagram, urinated on her and raped her for hours. During these hours other people watched and no one stopped them. Instead, one live-tweeted the horrific event using the hashtag #rape and #drunkgirl saying: “The song of the night is Rape Me by Nirvana”

A video of one of the witnesses laughing and joking surfaced and said, “He raped her harder than that cop did to Marcellus Wallace in Pulp Fiction” into the camera. This is just one example of how social media influences rape culture in American society.

Every two minutes someone in the U.S. is sexually assaulted, and each year there are 207,754 victims according to the Rape, Abuse and Incest National Network. However, 54 percent of these crimes will go unreported and 97 percent of rapists won’t spend a day in jail.

Marshall University’s women’s studies department in West Virginia defines rape culture as “an environment in which rape is prevalent and in which sexual violence against women is normalized and excused in the media and popular culture. Rape culture is perpetuated through the use of misogynistic language, the objectification of women’s bodies, and the glamorization of sexual violence, thereby creating a society that disregards women’s rights and safety.”

This attitude is conveyed through various media outlets online, including the Alpha Wolf meme howling “Take what is yours,” as well as “Be the alpha male, penetrate everything!” Reddit, the social news and entertainment site that allows users to add their own content anonymously, contributes to rape culture through the notorious misogynistic content. According to Google’s DoubleClick Ad Planner, Reddit users are 72 percent male as originally reported in the Huffington Post article, “Reddit Rapists Come Clean on Controversial New Thread.” One Reddit subgroup is titled “r/chokeabitch,” and another poses the question, “Reddit’s had a few threads about sexual assault victims, but are there any redditors from the other side of the story? What were your motivations? Do you regret it?”

One of the offenders stated, “I am a post-colleged age male who raped several girls through use of coercion, alcohol, and other tactics over a course of 3 years.” The comment was soon taken down by the user because of the backlash the Huffington Post article ensued.

In addition, bloggers such as RooshV give “tips” to young men on how to get laid. This includes articles like, “When No Means Yes” and encourages young men, “Instead of asking, just do it anyway and see what happens.”

“Some media images and portrayals certainly perpetuate this sort of worldview, including news coverage that includes details that invite news consumers to blame victims or mitigate suspect culpability,” said Nancy Worthington, professor and chair of the Quinnipiac Media Studies Department who is interested in how women are portrayed in the media.

In those cases, it’s usually not the reporting that’s untrue, but the contextual information included about a victim’s behavior and choices, such as substance abuse, mental health issues, or frustrations with their home life, that encourages blaming victims and discounting the perpetrator’s responsibility, Worthington said.

“In my own research, I’ve found a few cases where journalists did a great job of avoiding that by choosing to include comments from gender violence experts and sometimes from rape survivors in cases where they feel comfortable contributing to news stories,” Worthington said. “So, reporters had to take the initiative to go beyond the easy interviews, such as those with police working the case.”

“Rape as a punchline is everywhere in culture, from the literal as displayed in Daniel Tosh’s sociopathic rape ‘joke’ this summer to the lovable Neil Patrick Harris in ‘How I Met Your Mother,'” Goodheart said. “So to say rape is prevalent in college student’s lives would be selling the point short.We perpetuate it in media and policy.”

Goodheart added that he was horrified when Cathrynn Brown, a state representative of New Mexico, introduced a bill proposing that rape victims see their pregnancies through or they could be punished for tampering with evidence. She quickly amended the bill after the national outrage that resulted.

Rape culture is a contributing reason to why women carry mace when walking alone, or lock the doors at night, Goodheart said.

Rape culture resides not only in the bubble of the football worshipping town, Steubenville, but on Quinnipac’s campus, as well. On Nov. 29 of last year, the sorority Pi Beta Phi sponsored a women’s self defense class, T.A.K.E., that was created by the parents of Ali Kemp, a rape and murder victim from Kansas State University.

“I think it’s great that they are offering self defense classes for women, but I just think it is very sad that we live in a society where women have to learn how to defend themselves and it’s expected that we learn self defense because it’s that plausible that we can be threatened,” said Angelique Fiske, a junior print journalism major from Ludlow, Mass. “We teach women how to not be raped, but we don’t teach don’t rape which is really scary.”