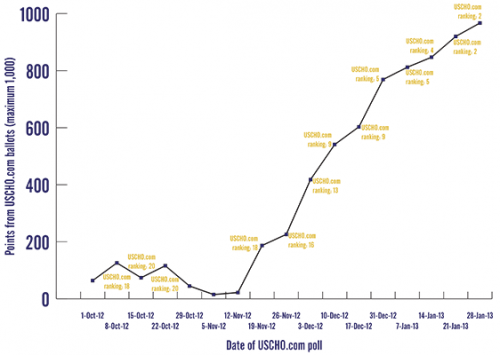 To say the Quinnipiac men’s ice hockey team is hot is an understatement. Thanks to a 17-game unbeaten streak, the Bobcats have jumped up to No. 2 in both the USCHO.com and USA TodayUSA Hockey Magazine polls and have held the No. 1 spot in the PairWise rankings.

The Bobcats are all over the headlines. They’ve been featured on NBC Connecticut, CBSSports.com, Sirius XM College Sports Radio, the Hartford Courant and many more news outlets. Head coach Rand Pecknold estimated he has done nearly 17 interviews in the past two weeks.

But in the locker room and on the ice, the only focus is on the current practice and the next game.

“I can see how that (the attention) can trouble some people, but not our team,” senior goaltender Eric Hartzell said. “We know what we need to do to win, and it’s not looking at the rankings. … Come to practice everyday, do the same thing every time.” 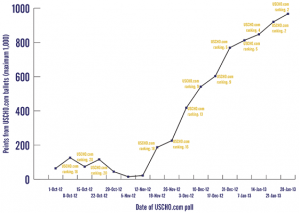 Though ranked second in both national polls, Quinnipiac boasts the best winning percentage and the best RPI in college hockey, while having a tougher strength of schedule than top-ranked Minnesota, which only leads in the USCHO.com poll by eight points.

While the polls are important, the PairWise Rankings determine seedings in the NCAA Tournament. The five conference champions (ECAC Hockey, Hockey East, Atlantic Hockey, Western Collegiate Hockey Association, and Central Collegiate Hockey Association) automatically gain bids to the tournament, while the next 11 top-ranked teams are admitted as well.

“The polls are nice from a recruiting standpoint and an exposure standpoint,” Pecknold said, “… but as coaches we just keep telling [the players] to keep their eyes on the prize and stay focused.”

The team isn’t getting ahead of itself, nor falling in any traps. While the team plays at No. 8/7 Yale this Saturday, the Bobcats travel to face Brown, a team they have played nine times in the past two years, Friday night. Pecknold prepares his team for the Friday game in a weekend series.

“We have to stay focused, can’t start thinking about Yale the next day, obviously that’s a huge game for the area, for the two schools and for the community,” Pecknold said, “but we cannot look past Brown.”

The Bobcats haven’t lost since Nov. 6. They have won 15 of their past 17 games and have only tied twice. They don’t care about the polls.

“All we care about is wins,” Dalhuisen said, “and the numbers will take care of itself.”