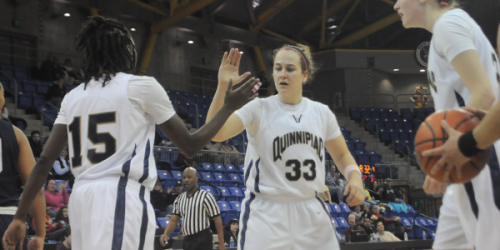 Coming into Saturday afternoon’s game against Fairleigh Dickinson at the TD Bank Sports Center, the Quinnipiac women’s basketball team was a perfect 6-0 in Northeast Conference play, good for a two-game lead. 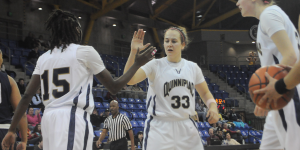 Behind Junior Camryn Warner’s career-high 15 points, the Bobcats continued their perfect conference play, and extended their winning streak to eight games with a 66-39 victory over the Knights.

“The defense really led us into our offense,” Warner said. “We got stops, and that opened up my offensive game. Any given night, anyone on our team can step up and score. That’s why we’re having such a good year.”

The first half was a back-and-forth battle the whole way, as no team led by more than six points. However, capped of by a deep 3-pointer from sophomore Jasmine Martin, the Bobcats went on a 10-1 run at the end of the first half to take a 31-26 lead into the break.

“I saw that there wasn’t a lot of time left, and I put it down,” Martin said. “I think it was a big lift for our team going into halftime.”

Quinnipiac, using that momentum, outscored Fairleigh Dickinson (8-10, 3-4 NEC) 35-13 in the second half. By way of strong defense, Quinnipiac held the Knights to a season-low in points.

“We seemed a little bit sluggish in the first few minutes, but that run at the end of the first half sparked us,” Quinnipiac head coach Tricia Fabbri said. “This could be one of my favorite wins of the year because of what we were able to do on the defensive side.”

Jasmine Martin, who scored 21 points her last time out against Saint Francis, continued her hot play and led Quinnipiac with 16 points. She had five rebounds of her own, as well.

The Bobcats forced 25 turnovers throughout the game, which was good for a plus 16 in that particular category.

“Pressure and pace has been our emo all year long,” Fabbri said. “You’re going to have nights where it isn’t easy to score, but we were still able to produce a 27-point victory.”

The Bobcats look to extend their eight-game win streak on Monday, when they host
Central Connecticut State in another NEC battle.

“We have to know that everyone is out to get us at the moment,” Martin said after
the game. “Everyone knows that we’re top in the conference. We just have to keep
fighting and practicing well, and let that carry over into the games.”