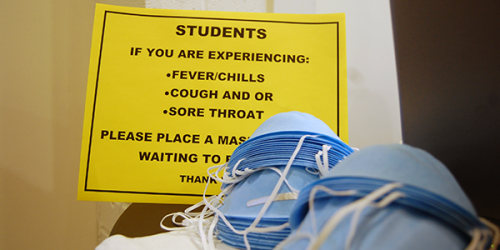 Students who are contagious with the flu will be sent home, according to a Jan. 11 email to students from the Interim Director of the Student Health Center Sheila Burke. Students who cannot go home because they live more than 200 miles from Quinnipiac University will be isolated in empty apartments in the Complex residence hall, Director of Emergency Management John Twining said. In the email, students were told to get the flu shot and to remain at home after winter break if they had the flu. 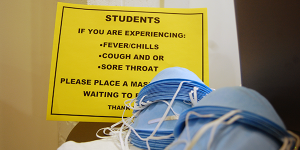 [/media-credit]“Social distancing is really the only way to keep infected people from passing [the flu] onto people who aren’t [sick],” Twining said.  “We put together the plan for the isolation infirmary… keeping those people who are infected out of the general population, send[ing] them home where it is comfortable and where they are not going to be in the residence halls.”

When students get the flu, the Health and Wellness Center will provide them with Tamiflu (a medicine that treats the flu) and give them a protective mask to wear while they collect their belongings, Burke said. Students will then wait in the isolation area until their parents arrive.

The roommates and close friends of sick students will have the chance to take a proactive dose of Tamiflu as well, Burke said.

Professors and parents were also notified of the plan to send contagious students home, Burke said.

This procedure is based on the university’s criteria for dealing with the H1N1 virus in 2009, Twining said. Both plans were set up by the Emergency Management Team, which is made up of various departments at Quinnipiac, including Student Health Services.

Sophomore Jessica Elby, who received her flu shot for the first time after reading Burke’s email over winter break, was pleased with the plan to send sick students home.

“I think it is kind of good because I know how [the flu] can spread,” Elby said. “If I had the flu, I would want to leave campus and I would be glad to be excused.”

There is a greater risk of catching the flu on a college campus where students are living together, according to Twining.

“If someone doesn’t realize [he has] the flu, he could be passing it on,” Twining said. “The reason we are doing this is to keep everybody healthy and safe. If you do have the flu, don’t go to class. Don’t try to live it out for five days in the residence hall. Go to the isolation place. Go home.”

The university is trying to make the isolation area comfortable and it will be staffed with medical personnel at all hours, Twining said.

According to The New York Times, this year’s flu season is worse than in past years. The Connecticut Department of Health reported on Jan. 17 that there have been 629 cases of the flu in New Haven County throughout the past six weeks.

A high fever, cough, chills and body aches are some of the symptoms of the flu, Burke said.

“The flu is not a regular slow cold coming on,” Burke said. “You are going to know that you have it.”

There are ways to prevent the flu such as your washing hands.

“Washing hands is the most important thing so that the disease does not spread,” Burke said. “People sometimes don’t realize that they are playing with their hands and mouth…that is how you can pass [the flu] onto yourself.”

As recommended in the email to students: resting, drinking fluids and getting the flu shot are essential.

“You still can get the flu if you have the flu shot, but typically they say the case will be more mild,” Burke said.

Although Student Health Services ran out of flu shots after administering 2,250 shots to the Quinnipiac community in October and November, it is equipped with extra food and medicine for students, Burke said.

Burke suggested that students who believe they have the flu should go to the Health and Wellness Center on the Mount Carmel campus, which is open 24 hours each day.