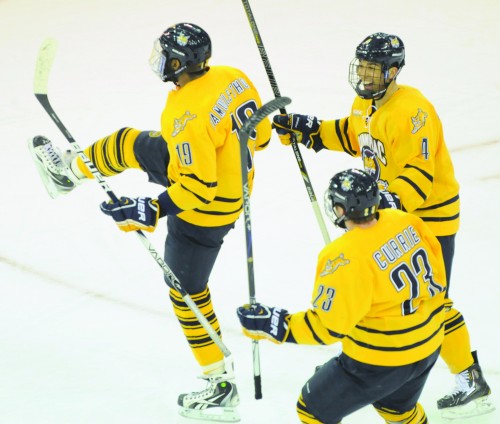 Standing on his head. It’s one of the oldest adages in all of sports. It’s used when a hockey goalie makes saves that he has no right to make, when a goaltender becomes an impenetrable wall in front of the net. 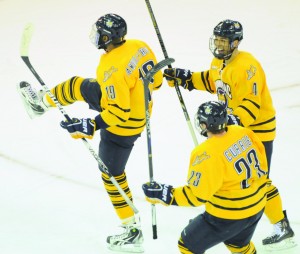 [/media-credit]
The Bobcat senior has catapulted Quinnipiac into the national spotlight with a No. 2 national ranking and a 16-game unbeaten streak (14-0-2), the longest in the nation and longest in program history. With a 17-3-3 overall record, the Bobcats have risen to the No. 1 spot in the PairWise rankings, a system the NCAA uses to determine the tournament bracket.

Former teammates of Hartzell, Brandon Wong and Eric Lampe were the last Bobcats to be nominated for the award in the 2009-10 season. Quinnipiac’s assistant coach, Reid Cashman, was also nominated in 2005 and was the only one of the three to make it to the final 10 stage.

Quinnipiac has never had a Hobey award winner and has made it to the NCAA tournament just once in 2002.

Despite Hartzell’s success this season, history is not in his favor. Since the award was founded in 1981, only two netminders have taken home the trophy: Robb Stauber in 1988 and Ryan Miller in 2001. Miller has since become an Olympic medalist and is currently the starting goaltender of the NHL’s Buffalo Sabres.

Hartzell however is producing the stats to give him a chance to become the third goaltender to win the award. Hartzell ranks first in the nation in wins with 17 and second in goals-against at 1.4779 per game. The man between the pipes also has the 10th best save percentage at .933 as well as four shutouts on the year, one behind the nation’s leader.

Professional scouts have taken notice of Hartzell at this point. For the weekend series against Nebraska-Omaha there were reportedly close to 40 NHL representatives on hand to watch.
With the No. 2 team in the country, Hartzell isn’t the only one that scouts have taken notice of. Kellen Jones is one of the elite forwards of the ECAC Hockey and is draft property of the Edmonton Oilers, while the same applies for Jordan Samuels-Thomas of the Winnipeg Jets and Matthew Peca of the Tampa Bay Lightning.

The Bobcats have the transcendent talent on their roster required to compete, plus they have a wealth of leadership and experience in their senior class as 11 of the 28 roster spots belong to seniors, including Jeremy Langlois, the NCAA’s active career-leading goal scorer.

To begin the season, the Bobcats looked worthy of their top-25 ranking as they collected a road victory against No. 15 Maine. But it was not an early season sign of a fast start. Three weeks after their win over Maine, Colgate drubbed them 5-1 on Oct. 27. They lost again on Nov. 6 to an American International team that shouldn’t have been able to compete and dropped to 3-3-1 on the young season. It looked as if inconsistency would haunt them yet again.

“We took some losses in the beginning of the year and that was sort of an eye-opener that we need to come out and play our best every night,” Samuels-Thomas said after a game earlier in the season.

But then they started winning.

It all began with an overtime win against Colgate on Nov. 9. They carried momentum with them to a win the next day when they were matched up against No. 4 Cornell at home in front of a sold-out crowd. Against the No. 4 team, Hartzell rebuffed 22 of 23 shots. The month culminated in Hartzell’s second shutout in 10 days in a 4-0 win against No. 7/8 Union. The win gave the Bobcats three wins against top-16 teams in the month of November and four on the year.

The Bobcats entered December riding a seven-game unbeaten streak and with a No. 16 ranking in the USCHO.com as well as the USAToday Poll. They went through the middle of December without a blemish, setting them up for a heavyweight weekend series against No.12/13 Nebraska-Omaha to improve to 13-3-2 on the season and pushing their progra record unbeaten streak to 11 games.

“Everyone on our team believes we are the best team in college hockey,” Hartzell said after the weekend sweep. “We just have to continue playing that way.”

The seniors on this Bobcat team have proven over the course of the season that they have learned from the failures they experienced as freshmen. After wrapping up December on a high note, Quinnipiac carried its momentum and focus into January, toppling No. 8 Dartmouth and No. 16 Union.

Quinnipiac has won eight games this season against opponents who were at the time ranked No. 16 or higher in the national polls. Its last loss came more than two months ago on Tuesday, Nov. 6, against American.