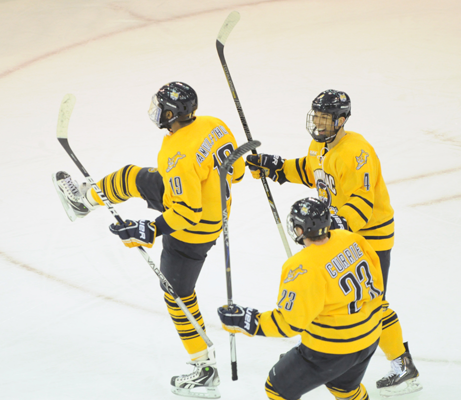 Three years ago, Quinnipiac started its season 13-1 and climbed up to the No. 4 spot in the national rankings. After that stretch, the Bobcats lost 11 of their next 14 games, going 1-11-2 in the stretch.

Now ranked fifth in the country, Quinnipiac head coach Rand Pecknold knows this is a different team – a much better team, he says. 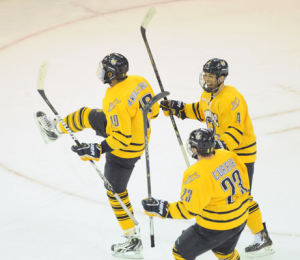 “This is a much better hockey team,” Pecknold said. “… I think it’s two completely different teams.”

Junior Jordan Samuels-Thomas scored the game-winning goal with 90 seconds left in overtime to give the Bobcats (15-3-2, 9-0-0 ECAC Hockey) their seventh straight win. The Bobcats have won all seven games against ranked opponents this year.

The game-winner was the third such goal of the year for Samuels-Thomas, following scores against Nebraska-Omaha on Dec. 29 and Maine on Oct. 6.

“We expect to win every game and be competitive, and we know if we play our game then we’re gonna have good results,” said Samuels-Thomas, who scored his sixth goal of the year.

“It’s probably the biggest score I can think of,” he said. “With a win streak like we’re having, it’s really big.”

“We should have put them away,” Pecknold said. “We got sloppy late and let them back in the game.”

Travis St. Denis and Bryce Van Brabant scored for the Bobcats, while Matt Lindblad and Tim O’Brien scored for Dartmouth.

Quinnipiac goaltender Eric Hartzell made 27 saves on the night, including 13 in the third period. Grant recorded 32 saves.

Even though the 2009-2010 team featured players like Eric Lampe and Brandon Wong, Pecknold said this year’s team has a lot more talent with Connor and Kellen Jones, Matthew Peca and St. Denis. While no single player dominates the stat sheet for the Bobcats, 12 different players have at least seven points and four of them have tallied at least 10, meaning the team doesn’t need to rely on one person to score.

“We’ve got a lot of big-time players,” Pecknold said. “It’s great that (Samuels-Thomas) scored tonight, but all season we’ve had a lot of guys chipping in. It could have been any of them.”

Quinnipiac plays again tomorrow against Harvard at 7 p.m., another conference game. The Bobcats have not lost since Nov. 6 against American International. The Bobcats started the year 3-3-1.

“We took some losses in the beginning of the year and that was sort of an eye-opener that we need to come out and play our best every night,” Samuels-Thomas said. “We know what it takes to win against good teams.”