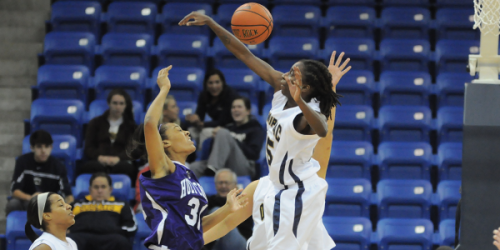 The Quinnipiac women’s basketball team continues its undefeated season with a 61-49 win over Holy Cross. 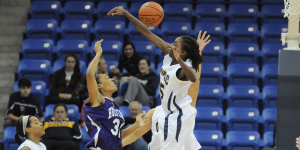 All Martin’s points came from behind the arc, while Guastella tallied three  3-pointers of her own.

The Bobcats shot 33.3 percent for the game while shooting 30 percent from behind the arc.

“(Guastella) is the perfect forward,” head coach Tricia Fabbri said. “She can shoot it and she is one of our best three point shooters. It is a really good advantage for us to have a kid that is 6-1 6-2 that can really knock the ball from the perimeter.”

Quinnipiac improves to 7-0, the best record since becoming a Division I team.

Although being outrebounded 52-40, the Bobcats commanded a lead the entire game and only gave up 11 second chance points.

“We talked a lot about our rebounding, both offensively and defensively,” Fabbri said. “We’ve seemed to get our hands on a lot of balls but we’re not doing a good job bringing it in.

Quinnipiac also dominated on the defensive end, recording 15 steals in the outing.

“I think that’s been our ammo all year,” Fabbri said of the team’s steals. “More importantly we turned the team over 30 times. That’s what we are going to do.”

Holy Cross now 4-5, was lead by Lisa Mifsud with 11 points and Brisje Malone with 10.

The Bobcats look to grab their eighth win after a week off as they travel to take on the University of Hartford on the 16th.