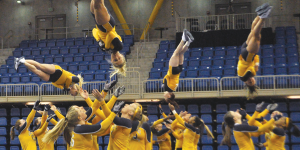 As a sport, acrobatics & tumbling has transitioned many times over the past few years, from the scoring system to the teams involved to the name itself. But one of the biggest things it has done is changed the identity of the sport formerly known as competitive cheerleading.

Powers, in her 15th season at Quinnipiac, became one of the founding coaches of the National Collegiate Acrobatics & Tumbling Association. It has yet to be recognized as an NCAA emerging sport, but its mission is to become a fully-sanctioned NCAA sport.

Quinnipiac brought on acrobatics & tumbling because of Title IX and is one of the six founding members of the NCATA. While it is just in the third year known as acrobatics & tumbling (it used to be called stunts & tumbling), the program has taken a big step toward advancing the sport. The TD Bank Sports Center will host the NCATA Championships in April, something that will help the sport gain its own identity, according to Powers.

“I’m hoping that at a local level that it brings the renaming of the sport from competitive cheer to acrobatics & tumbling because there’s some confusion out there,” Powers said.

There is a definitive difference between cheerleading, competitive cheerleading and acrobatics & tumbling, according to the NCATA. The main purpose of cheerleading is to support.

Competitive cheerleading consists of just one team routine that lasts 2:30 that is judged based on several different categories from skill execution to uniforms. Acrobatics & tumbling is an evolution of competitive cheerleading. It takes on the team routine and adds five other events: compulsory, acro, pyramid, toss and tumbling. Each event tests the players’ skills and execution.

“To have it isolated as a sport, the skill sets, the competitiveness aspect of cheerleading is acrobatics & tumbling,” Powers said. “When you put down the pom poms and put down the signs, you’re left with the skill sets, which have the governance of trainers and sports medicine people and strength and conditioning coaches, and it’s a good thing.”

To Powers, being able to host the event will be crucial in allowing people, especially around Hamden, to see what acrobatics & tumbling is actually about. Powers said she has plans to get the local community, from youth gymnastics organizations to high schools, to see the event.

Baylor hosted the championships last year, and the University of Oregon two years ago.

“I like traveling a lot, but it’s going to be so nice … it’s new to Quinnipiac,” senior captain Christina Lasto said. “Quinnipiac’s never held it before, and I think there’s going to be a lot of excitement.”
Quinnipiac, Fairmont State, Azusa Pacific, Baylor, Oregon and Maryland all helped implement the NCATA, but Maryland has since dropped the program to budget cuts. However, UMass Dartmouth added the sport for the 2012-13 season, while Kings College (N.C.) and Alderson-Broaddus College will also add it in 2013-14. Powers said more schools are in talks adding the sport.

“I’m curious to see what’s going to happen in the future of the sport down the road as we keep on picking up more schools,” Powers said.

By adding new teams each year, the bid process for future hosts of the national championship can change. According to Powers, this could be the last year when the championship is this small.

“Each year it grows and each year, whether it’s a new school or the scoring system is getting revised, there’s some improvement made,” Lasto said.

The NCATA does not intend to have players crossover and participate in multiple sports, but rather wants to create new opportunities for female student-athletes. So far, it has.

Former assistant coach Jacqueline Svadeba, who played at the University of Oregon, left Quinnipiac to take a head coaching position at Alderson-Broaddus College, which will add the sport for the 2013-14 season. Erin Trotman, the Bobcats’ acrobatics & tumbling captain last year, will take over for Svadeba as an assistant coach, as well as Manny Bonilla, head coach and general manager of the Cheshire Acrobatic Training School of Gymnastics.

“There are so many opportunities outside of this, too, and I think because people are growing up and graduating in this format, they can bring it to all other different places,” Lasto said.
Added Powers: “We were pioneers, but what it means is that other people see that this is a sport that women are truly interested in and want to do it.”

While the sport is young for Quinnipiac, the roster is only getting bigger. Twenty-four of the 29 players on last year’s team were underclassmen. This year’s team has just three seniors compared to 14 freshmen, according to Powers. She said because more people are getting involved in the sport and discovering acrobatics & tumbling as it progresses, the sport is only going to grow.

“The numbers between the competitive cheer kids and the gymnastics kids out there, we’ve got a recruiting pool that is gigantic,” Powers said. “I think [athletic directors] across the country are realizing that it’s a great sport for females on their campus, so they’ve watched it, they’ve watched the progress of it, they’ve watched the evolution of it, and are quite fascinated with it and willing to bring it to the board of trustees and bring it as a sport.”

Two new players will be entering the sport next year: Shayla Rae Kelly, the daughter of former Olympic champion Mary Lou Retton, and Kiara Nowlin, one of the top recruits in the country who has earned four gold medals in power tumbling. Having two future players with such strong backgrounds is going to help put the sport on the radar, Powers said.

“One’s a medalist and the other one is a gold medalist’s daughter, and they’ve facilitated their way into the sport,” Powers said.

When the other five schools come to Hamden in April, Powers said she hopes her team will be able to compete in the national championship, which Oregon has won the past two years. Even though the team will be young, it has a different dynamic than in years past.

Powers said Lasto is one of her go-to players when the team needs someone to put points on the board.

“She is the person who leads by example,” Powers said of her senior flyer. “She is the person that, if you want to know what it’s like to work hard, you watch her because she’s relentless.”
Sitting next to her coach in her office, Lasto’s face turned red and then smiled.

“I just want the team to do well. Whatever I can do to help the team do well, that’s what I want to do,” Lasto said. “I don’t even care about myself at all. I want to win and I want everyone else to want to win too, so I will do what I can to bring the win.”

Lasto attributes her success on the mat to her self-confidence.

“Coming from my high school team, I was good, but then I came here and there were a bunch of kids who were just as good, so it was a little intimidating,” Lasto said. “But every year I keep getting more confident in my skills and my ability that I can do anything that I want to and I’ve put my mind to it.”

Aside from Lasto, the team has two other seniors: Chivone Forrester and Erin Reed.

“Erin does a very good job at motivating people and inspiring them and putting positivity in a situation that isn’t always positive,” Lasto said. “I think Chiv pushes herself a lot, I think everyone sees how she pushes herself.”

Even though Lasto has plans to go to graduate school, she hasn’t ruled out taking a route similar to Trotman and becoming an assistant coach at a school that will be adding acrobatics & tumbling.
“I’m hoping something will work out, but we’ll see,” Lasto said.

Powers turned to Lasto, smiled and said, “It could be here, you never know.”