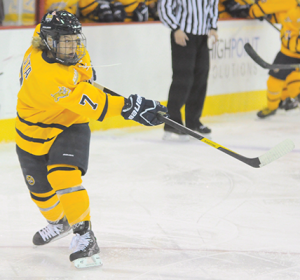 Many college athletes fall victim to the infamous “sophomore slump;” playing a worse second season after a successful freshman year. Forward Nicole Kosta has beaten those odds, currently tied for second on the team in goals, placing second in assists and tied for the team lead in plus/minus

“Every freshman goes through that overwhelming experience, not knowing what to expect. Coming in a step ahead and understanding how the season goes has given her a real edge,” Quinnipiac head coach Rick Seeley said. “She’s an exceptional penalty killer, and her effort has been incredible, game in, game out, shift in, shift out.”

In her freshman season, Kosta recorded 33 points in 34 games, including 25 assists, good for the team-lead. She was also credited with notching two game winning goals.

Yet in 2012, Kosta has registered 30 points through 19 games played, 21 of those coming via the assist. Kosta also has a plus/minus of +21 so far, clear indicators of her strong improvement on the defensive side of the puck.

“I feel a lot more comfortable this year on the ice. I knew what I was expecting coming in, so I didn’t have an adjustment period like I did last year,” Kosta said. “Things are clicking this year.”
This season, the Bobcats have played to a 10-7-2 overall record and are 6-3-1 in conference play, adding up to fourth place in ECAC behind Cornell, Harvard and Clarkson.

Before coming to Quinnipiac, Kosta played in the U18 championships in Sweden representing Canada. Kosta also starred for the Mississauga Junior Chiefs, a team that both Victoria Vigilanti and Nicole Connery spent time with before taking the ice for the Bobcats.

In her career with the Chiefs, Kosta was team captain, while totaling 60 points in just 31 games.

“As she’s adjusted to this level, she’s becoming one of the more elite players in our conference,” Seeley said. “That’s how she was in juniors, she kept getting better.”

This year, Kosta and Babstock have been driving forces to the team’s success. The two have combined for 27 of the squad’s 62 goals, while also serving as the only players with a plus/minus above +10.

“I think we’re definitely taking pride in producing offensively for our time. We’re producing but also playing well in our own end,” Kosta said. “We’re doing better on the forecheck, and keeping the puck in their end more often.”

Connery has seen Kosta’s success first hand, “She’s motivated, probably one of the most motivated players I know,” Connery said. “She’s 100 percent all the time. I know what she can bring, and she brings it every game. She’s there for the team to take us to some wins.”

In its last three contests, Quinnipiac has outscored its opponents 14-3, with all matchups ending up in the ‘W’ column. This past weekend, the Bobcats swept a pair of conference games against Rensselaer and Union, and Kosta recorded four points.

“It was maybe the most complete team effort since I’ve been here,” Seeley said. “I thought they were consistently good for the whole weekend. I think it was our first weekend of the year where we showed up from the beginning, worked hard for 120 minutes, and put two solid back-to-back games together.”

After squaring off against Princeton this weekend in a critical home-and-home series, Quinnipiac takes nearly a month off before returning to the High Point Solutions arena on Jan. 5 in an exhibition against McGill.

Meanwhile, Seeley continues to have high hopes for the forward.

“She works really well with Babstock, she’s a great kid, she’s talented, she wants to improve,” Seeley said. “Whether it’s system or individual skills, she goes out and works at it right away.”