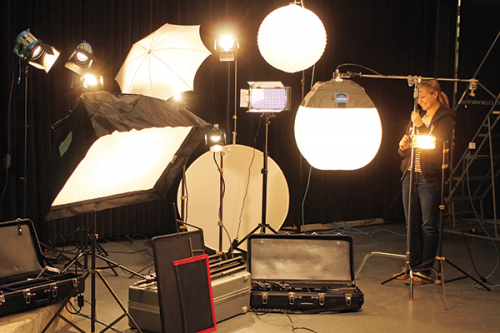 Administrators, faculty and students in the School of Communications offered their defense and reaction to a recent letter to the editor published anonymously in the Chronicle’s Nov. 14 issue.

The letter wrote about the recent guest speaker, Bobby Webster, an Academy Award-winning director of photography. The letter to the editor claimed that Webster, after looking at lighting kits, “called the equipment ‘shit,’” but the letter also claimed he said “the lighting kits were good to learn on because students will then appreciate good lighting kits when [they] get to use them.”

After the letter was published, Chair of Film, Video, and Interactive Media William O’Brien visited the FVI class “Senior Colloquy,” reading the letter and a response by Webster. O’Brien also encouraged the anonymous student to meet with him to discuss the content of the letter.

The letter also caused a steer with the administrators of the School of Communications, such as Dean Lee Kamlet and Michael D. Calia, director of the Ed McMahon Communications Center.

“My problem with the letter is that it reflects an attitude of at least one student, who wrote the letter, that if only they had some better piece of equipment that would make them better filmmakers,” Kamlet said. “And any filmmaker will tell you that it’s not about the equipment, it’s about your ability to tell a story.”

Quinnipiac University’s filming equipment is provided by Lowel Lighting, which is used in professional digital video, digital photography and film based photographic production, according to the company’s website.

“Our lights, controls, mounts and kits are designed and built for rugged dependable use, ease of operation and portability,” the website says.

The equipment is regularly replaced and updated when necessary each year, according to Calia. The School of Communications spends tens of thousands of dollars on new equipment each year, Calia said.

“We provide equipment and accessories to help support the courses that are taught in the various majors here at the School of Communications,” Calia said. “The units we offer [students] are quality professional units that are lightweight and flexible so that they can use it in a number of different situations.”

Students have complained in the past of the heavy and bulky lighting kits offered at Quinnipiac, according to Calia. After the students brought their complaints to Calia’s attention, the school responded by getting lighter “go-kits.”

This past spring, Calia and other administrators met with Quinnipiac Film Society members and seniors to discuss any concerns with the equipment. The students were interested in using DSLR cameras. Next, the School of Communications bought 14 DSLR cameras this semester, according to Calia.

“We spend tens of thousands of dollars every year on new gear; we do buy new gear every year, always replacing, sometimes things go out of date or are worn out,” Calia said.

Quinnipiac Film Society members rely on and work with the School of Communications’s equipment. However, senior and Vice President of QFS Shane Collins bought his own equipment because of consistent problems working with the school’s kits.

“I have had issues with equipment before, and personally purchased my own equipment so that I don’t have to worry about the equipment room,” Collins said. “There isn’t enough of the equipment that everyone wants, like micro dollies, and the DSLRs that we do have are seniors-only.”

Junior Lisa Copland is the director of promotions for QFS and an associate producer of “The Morning After” talk show at Q30 television. Copland also works at the equipment checkout station in the Ed McMahon Communications Center.

“I don’t think the equipment needs to change,” Copland said. “We have what we need for the projects we film. People don’t always realize what we have because they aren’t told about it, but we have videos of everything we have in the equipment room at the checkout counters.”

Other students also took notice to the new equipment.

“This semester the School of Communications actually added more cameras,” Copland said.  “They added T4i’s for seniors to use for [their] senior project only. They added GH2’s for junior level courses. Those are both DSLR cameras. The downfall is that there are only eight or nine of the senior ones and five for the juniors. It’s a step in the right direction.”

However, there is a lack of diversity in filming equipment and accessories, Collins said.

“The equipment that the [School of Communications] has is primarily centered on television and broadcast journalism production, not feature film or narratives,” Collins said. “They are improving with the addition of DSLRs and Zoom H4n recorders, but aren’t there yet. I’d personally like to see professional-level feature cameras and lenses such as a RED, Sony CineAlta or ARRI Alexa.”

Senior FVI major Caitlin Riblett was in the classroom and overheard the comment by Webster. Riblett was working on a lighting exercise directed by Webster when she and other students heard him comment on the equipment.

“It wasn’t an announcement, he was setting up the equipment and he said it under his breath ‘yeah, this is shit,’” Riblett said. “It wasn’t meant to be heard, I don’t think he meant for it to be said as an official opinion.”

“I don’t think the professors heard,” Riblett said. “I think he said it specifically when the professors wouldn’t hear, but the kids I was near kind of laughed and were kind of like ‘I know, isn’t it?’”

O’Brien came into this Senior Colloquy class after the letter to the editor was published in order to discuss the issues, according to Riblett. He also invited the anonymous writer to speak with him and faculty to resolve any problems the student may have with the equipment.

“I think you’re going to find that the student isn’t going to come forward because we all knew that people were looking for the student, but having administrators say it’s immature to all of us in the class I don’t think the student will say ‘that’s me,’” Riblett said.

Despite the letter, the School of Communications does not plan to make changes to its equipment.