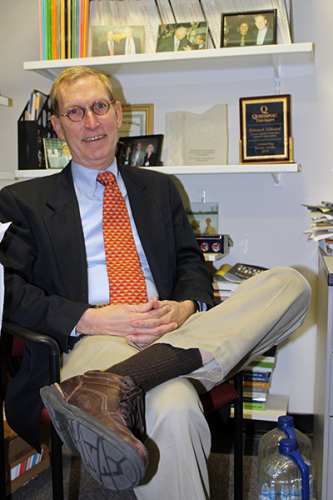 His office is dimly lit, but brightened with memorabilia that showcases the distinguished broadcast journalism career of Dr. Edward Alwood. 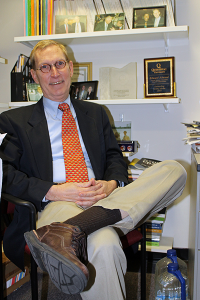 [/media-credit]
Shelves are lined with books, two of his own creation. Framed newspaper clippings of his early work, his old radio station advertisements and a collection of historic photographs hang on the walls. Picture frames preserve moments, including his coverage of the nuclear accident on Three Mile Island in Pennsylvania, his work as a CNN Washington correspondent, and his time teaching in Bulgaria.

Each memento comes with a story.

“See that’s [Ronald] Reagan in the Rose Garden,” Alwood said, standing up over his desk to get a closer look at the black-and-white 8-by-10 photograph from his time covering the White House in the 1980s.

He peers into the frame and points to himself in the sea of reporters with his colleagues: Leslie Stahl, Helen Thomas and Peter Arnett.

Alwood attributes this lifelong broadcast journalism and media relations career to an experience he had growing up.

“My hometown is called Albany, Ga.,” he said. “The natives pronounce it, ‘Al-binny.’ They do that because when they say, ‘Al-binny,’ nobody says, ‘New York?’”

It was 1961. The civil rights movement was gaining momentum in the South. Black churches and black universities were on the frontline for the movement as freedom writers, protests, demonstrations, sit-ins and civil rights leaders became prominent fixtures throughout Albany.

Reporters crowded the front porch of the New Albany Hotel on Pine Avenue across from City Hall each day, waiting for the next story. Eleven-year-old Alwood would often hop on his bike and ride downtown to the hotel, curious to see the goings-on.

“When [the press] saw the police run out and get on their motorcycles, they’d follow them and get the story,” Alwood said. “Well, then I followed them.”

On Dec. 16, Alwood’s curiosity led him to witness history. Civil rights leader Dr. Martin Luther King Jr. was arrested and taken to jail in the middle of Pine Avenue during the Albany Movement.

“Dr. King was not the person he would later be. He was just a troublemaker then,” Alwood said.

Alwood says this is how he got the journalism bug.

But Alwood says he didn’t know what journalism or objectivity was at such a young age.

Alwood says the local media ignored much of what was going on in the civil rights movement because they were broadcasting to the white majority in Albany. In order to see what really went on during the day, people had to watch the national news like NBC’s Huntley-Brinkley Report.

“The conservatives, the racists, just hated Huntley-Brinkley for all of this ‘stuff’ they made up,” he said. “But they weren’t making it up. I was standing there watching it.”

His parents were not supportive of his interest in journalism. Alwood’s dad often advised him to concentrate more on a job that would provide a regular paycheck.

“They thought when I was growing up that it was a little weird that I wanted to go into journalism,” he recalled.

Though he showed them his pictures and told them his stories, he says their response was typically the same: “OK, fine. Glad you entertained yourself. Now sit down and eat your beans,” Alwood said with a chuckle.

Despite his parents’ efforts to divert his interests toward what they thought was a more reliable career path, Alwood was not discouraged.

“I began to sniff around and stumbled into the world of journalism,” he said. “Curiosity is a funny thing. That’s what it takes to be a journalist.”