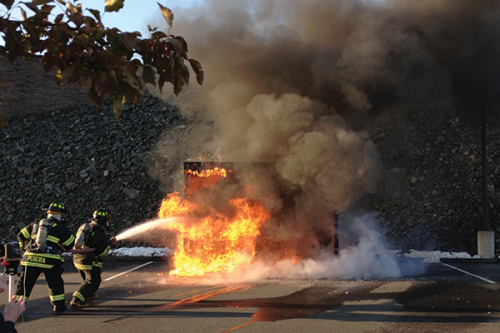 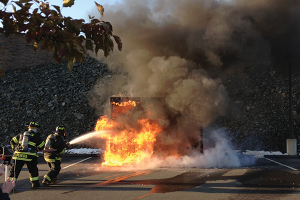 [/media-credit]Students and other attendees watched as Facilities put together a mock residence hall – the size of an Eastview bedroom — equipped with an actual bed, chair, desk and computer to be burned and showcased to all attendees at the event.

“The event is meant to inform the residents of York Hill of the dangers of fire and provide them with safety tips, especially because of all the cooking incidents that have happened,” SGA Senior Class President Andrea Rogers said. “It’s a cool way to see in real time how quickly fires can happen.”

The senior class cabinet worked alongside the Department of Public Safety and local facilities, like the Hamden Fire Department and engine companies, to provide the fire extinguishers for the event.

“I think it’s a real eye opener when the kids can see firsthand the destructive power of fire, how fast a small fire can rage out of control and how little time you have to react and get out safely,” said Brian Dolan, the deputy fire marshal for Hamden.

Apart from the fire display, the event had different stations where members from the local engine companies taught students how to use a fire extinguisher and put out an actual fire. SGA also put together a fire fighter’s maze for people to find their way through the obstacle course in darkness and save Boomer.

“It’s down low and pitch black so it simulates what a firefighter has to do when he goes inside a burning house,” Rogers said.

Onlookers watched with anticipation at 3 p.m., when local firefighters from the Hamden station carefully set a garbage can located in the mock residence hall on fire. After 10 seconds, the smoke detector went off and fire officers narrated what would be happening at each point if it was a real fire.

The entire room was completely burnt in approximately three minutes. Dolan explained that heat can reach up to 1,000 degrees Fahrenheit.

“It shows you how quickly a fire will ignite and take off,” said Richard Hally, training officer for the Department of Public Safety. “The whole room will become fully involved in the fire without sprinkler systems.”

SGA also teamed up with local businesses like Ray and Mike’s Deli, Aunt Chilada’s and Chartwells for a raffle. Guests were encouraged to throw their names in any of the fireman hats for a chance to win prizes, which included a pair of Toms, a QU spirit package, tickets to the Quinnipiac vs. Yale men’s ice hockey game, a lifetime free entry pass to Aunt Chilada’s and gift cards to both Chartwells and Ray and Mike’s Deli.

Although there were fun and games, the main message of fire safety was constantly stressed.

“Make sure you have working smoke detectors – early notification is your best chance for survival in a fire,” Dolan said. “Practice good fire safety everyday – don’t overload your extension cords, get rid of frayed cords, don’t smoke in bed or when drowsy and avoid using candles.”