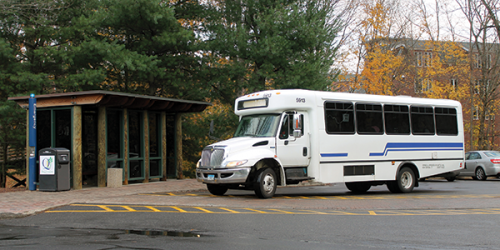 A concrete York Hill shuttle schedule will begin on Nov. 26 after the Student Government Association worked with the Department of Public Safety and transportation company DATTCO to make a shuttle system accommodating to students. 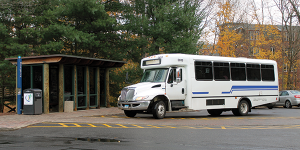 [/media-credit]After a year-long process, York Hill residents will soon no longer have to wait for a shuttle to the Mount Carmel campus. Vice President of Student Concerns Evangelos Milas met with Chief of Public Safety David Barger over the summer and on a weekly basis this semester to come up with a solution.

“The shuttles have always been a problem since we started having York Hill shuttles to campus,” Milas said. “There’s never been a real schedule; they run from a certain time and they have an end time and that schedule has been up, but they’ve never had a systematic stop time to York and Mount Carmel.”

With three York Hill shuttles running on a loop, and without a concrete schedule, shuttle drivers were open to take breaks in unofficial times, Barger said. The shuttle drivers would also alternate, resulting in more break times adding to the issue of inconsistent shuttles.

There once was a concrete shuttle schedule when York Hill’s residence hall, Crescent, first opened in 2009; however, it wasn’t effective which led to its current continuous loop system, according to Barger.

“So what we thought to do now was to just keep operating the buses on a continuous loop, thinking that you would catch everyone on that continuous loop,” Barger said. “Unfortunately, that did not work as efficiently as we wanted to.”

The effort of fixing the sporadic shuttle system began last spring semester, with former Vice President of Student Concerns Vincent Bond. Milas then took on the task and didn’t stop working until it was complete for this semester.

“We put together a schedule that would be compatible with class start and end times so students will be able to take the shuttle and not be late to class,” Milas said. “We wanted to make it more accessible.”

The biggest issue with the current shuttle system was its inconsistency and lack of reliability, Milas said. The many variables to the issue include the shuttle drivers’ break times, traffic on Whitney Avenue, the amount and the time for students to load and unload the bus, according to Barger.

“So if they need a shuttle to pick up at a certain spot, they tell everyone so they’re on the same page. That should help the communication process, too,” Milas said.

The new shuttle system was a long process because of SGA’s and Public Safety’s communication with DATTCO, according to Milas.To create this change in the shuttle system, DATTCO needed to alert its drivers of the new stop times.

There won’t be any additional changes to the shuttle system other than a concrete schedule, Milas and Barger said.

“If we see an increase in use, we can get another shuttle on the rotation,” Milas said. “There are three York Hill shuttles at a time. The more that students use it, the more efficient they’ll be.

This new shuttle system was a two-part initiative. SGA first changed the parking policy for juniors to park at Hogan Lot in the beginning of the semester, leaving seniors and commuters to park in North Lot.

“That’s helped us this year, but that’s not enough,” Milas said. “There’s still a lot of people taking their cars to campus and it starts [to] pack up on Mount Carmel. We’re really hoping that the shuttle system now will alleviate some of that congestion on campus.”