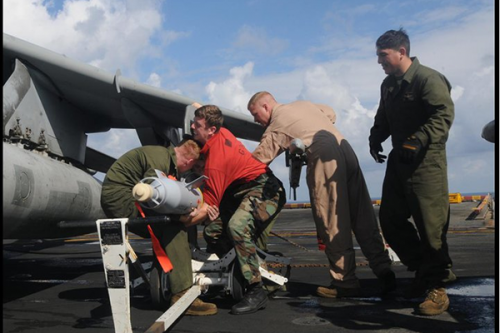 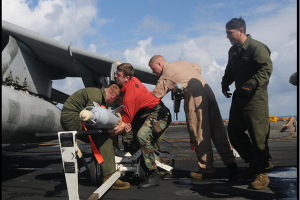 You cross paths with countless people every day. Behind each face you see, there is a story.

At first glance, you might notice that Eric Eisenreich, Matthew Bolton and Danny Devlin seem older than the average college student. You might then take note of Eisenreich’s observant eyes and cautious demeanor and the American flag on Bolton’s backpack.

But it takes a conversation to find out what truly sets them apart from the majority of the student population.

You would discover that these men are veterans.

Eisenreich, a 27-year-old from Pittsburgh, joined the U.S. Marine Corps straight out of high school, aiming to change the direction his life was taking.

“I think I might have been headed down a path that I didn’t want to lead myself to and I’d lost faith, so I went out to prove to my parents that I could make it,” Eisenreich said.

He served on active duty from 2005 to 2009. As an Artillery Cannoneer, Eisenreich was stationed in Iraq for two deployments, both seven months, and was part of a security convoy support unit that coordinated with the Iraqi army and police to build up their forces.

“I served as a gunner crew and weapon operator both deployments,” Eisenreich said. “I was the guy on top of the Humvee with a 240 Gulf.”

A year after he got out of the military, Eisenreich decided to attend college while on inactive duty because he found he did not have any transferrable skills when looking for employment. He is now a junior marketing major and international business minor.

Bolton, 24, is a Hamden, Conn. native who joined the U.S. Navy after high school and served from 2006-2011 as an Aviation Warfare Specialist. He said nothing about college appealed to him in high school, leading to his decision to enlist after graduation.

“I had always felt a sense of wanting to serve,” Bolton said. “I wanted to be in the military ever since I was a little kid.”

Bolton was deployed to the Middle Eastern region, Central American region and Africa. He worked with Marines to build ordnances, bombs and small explosives for aircraft. In March 2010, he built the ordnances used for strikes in Libya during the Gaddafi genocide.

He chose to pursue a higher education after being honorably discharged mainly because of the competitive nature he gained from his time in the military. He is now a sophomore occupational therapy major on inactive duty.

“When I got out I wanted to prove to myself that I could not only go to school but I could be on the dean’s list and be one of the best students here,” Bolton said.

Devlin, a 26-year-old from Stratford, Conn., joined the U.S. Army two years out of high school, after spending time working for management of local restaurants and nightclubs.

Being in the military runs in his family. Devlin’s father, uncle, brother and a few of his grandparents served.

“When I was younger I wanted to be on a SWAT team,” Devlin said. “I kind of went above and beyond that, but it’s just something I always wanted to do.”

He is now a staff sergeant in the U.S. Army Special Forces and a U.S. Army Ranger. He received a Purple Heart after his head was grazed by shrapnel from a rocket-propelled grenade.

Devlin’s first two years in the army were spent training for special forces and the next four were spent on the U.S. Army Special Forces troop Operation Detachment Alpha, or A-Team. He was deployed twice to Afghanistan and was also deployed to other areas of operation in Europe and Africa. 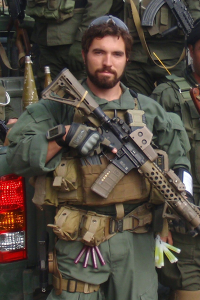 [/media-credit]After six years, Devlin decided he wanted to get a degree and is now a freshman business and entrepreneurship major, still on active duty.

“I love learning,” Devlin said. “I love having a knowledge of things and I figured the best way to do it would be to get out and go to school full time.”

Devlin is a demolition specialist for the Rhode Island National Guard. He goes once a month for three days of training, spends two weeks out of the year training again and once a year is deployed to a foreign country to do training with a foreign army.

“Once a month doesn’t really sound that frequent but it starts to add up,” Devlin said. “If you have something that you’re supposed to do over the weekend it’s really kind of one or the other: the National Guard or my schoolwork.”

He says transitioning from a fast-paced military lifestyle to sitting behind a desk for several hours a day in class has been a challenge. However, his experiences in the military have given him a different approach to college.

“I feel like I’m a little more well-versed than I would have been if I went to college straight out of high school,” Devlin said. “I’ve lived a little, I’ve been around formulating my own opinions on things, so I don’t think my mentality is as malleable as it would have been.”

Life in the military has made a successful college career a reality for all three men. Not only has it helped each of them develop a strong work ethic, but it also has given them a means of attending college.

Bolton says the U.S. Department of Veterans Affairs pays $17,900 a year for them to go to college. Through the Yellow Ribbon Program, Quinnipiac University pays the remaining expenses.

“It’s a huge incentive to go back to school,” Eisenreich said.

Eisenreich also works at a Veterans of Foreign Wars program where he is surrounded by the veterans that came back from the Vietnam War.

“They didn’t have this,” he said. “They had to pay a large portion of [tuition] out of their own pockets and that’s what led to a lot of homelessness.”

Eisenreich and Bolton want veterans to take advantage of the benefits they have earned and the skills they have gained, go to college and get an education.

These veterans can all agree that going to college, surrounded by students so much younger than them, takes some adjusting. Bolton compares the experience to feeling like Adam Sandler’s character in the movie “Billy Madison.”

“That’s how I felt my first semester,” Bolton said. “Since then I’ve acclimated myself and I feel like I fit in better and I see eye-to-eye with them a little better.”

Eisenreich also says he did not immediately connect with some of the younger students.

“I just feel like I was really lost in the beginning,” Eisenreich said. “I didn’t want to be closed off but I also didn’t want to jump right in and try to fit in.” 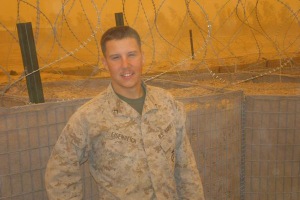 [/media-credit]The transition from their uniforms to school clothes became easier last year when Eisenreich and Bolton met on the first day of QU 101. They said finding each other and having someone to relate to was helpful.

When they both got involved in the Student Veterans Organization (SVO) this year, Bolton as president and Eisenreich as vice president, they hoped to support returning veterans and raise money for wounded warrior projects and organizations.

To further develop the SVO, they are holding their first event, a screening of “The Invisible War,” a documentary showing sexual assault in the military, in Burt Kahn Court on Thursday, Dec. 6 at 7 p.m. With the partnership of Alpha Chi Omega and the Wish Club, they will host the screening, guest speakers and a bake sale.

“We want to be there for each other as a support group,” Bolton said. “We’re veterans first and students second. That’s why we took this club on. We wanted to be able to connect everybody.”

Their goal was met when Devlin was able to connect with Bolton and Eisenreich through the organization.

“It’s helped a little bit because I’ve identified people within the Quinnipiac community that I can relate to a little bit more,” Devlin said. “We share similar experiences.”

Already with more than 20 members, they are at work recruiting new veterans. Bolton has contacted future veterans who are currently stationed in Afghanistan and are planning on coming to Quinnipiac next year.

They are not just looking for veterans, however.

“There are a lot of people in this school that, in one way or another, are somewhat connected to the military,” Eisenreich said. “It’s just as important to them as it is to us. They should feel more than free to come out and join the club.”

Members of the SVO plan to raise awareness for the student, faculty and staff veterans.

“It can be easy to forget that we have people overseas and there are people dying every single day,” Devlin said. “My whole team is active in Afghanistan right now and sometimes I forget that. It’s good to be reminded.”

Eisenreich, Bolton and Devlin serve as reminders of those who are still serving.

All three could be called back for deployment at any time. They are some of Quinnipiac’s secret warriors.