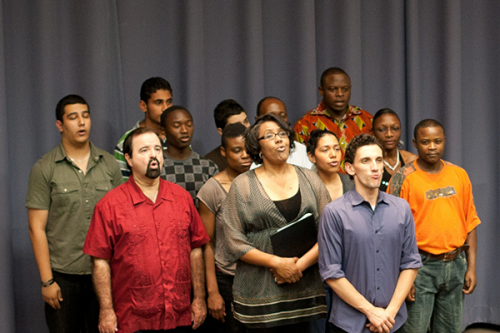 International Week kicked off on campus Monday, Nov. 12, with the performance, “Stories of a New America.” The New Haven-based group, Collective Consciousness Theatre (CCT), showcased an eight-person cast, three of which were actual refugees, sharing stories of arriving in America for the first time.

CTT, which focuses on performing shows that promote social change through theatre, partnered with Integrated Refugee & Immigrant Services (IRIS) in New Haven to write the play. IRIS helps roughly 200 refugees from places such as Afghanistan, Somalia and Iraq adjust to life in the U.S.

The production of “Stories of a New America,” which was performed in Buckman Theater, was a long process, as is a combination of interviews with 85 refugees. More than 100 hours of film were sifted through, some of which weren’t in English, before a dozen stories of struggle and triumph were combined into one play.

The show, directed by Maryna Harrison of CCT, shed light on the experiences of refugees when adjusting to life in a new place. The audience, as well as the cast members, learned from the performance.

“I didn’t know,” U.S. born actress Kimberly Wilson said. “I thought I was well read being from where I grew up, but when I met them and I realized the journey the refugees had to take, how many countries, and how many languages they have to learn. It’s eye opening and I count my blessings.”

While introducing the play, Chris George, the executive director of IRIS, said he greets refugees at the airport, and many times feels like he’s welcoming them to a life of poverty, George said. Poverty is a large problem for refugees. They come to the U.S. with nothing and have difficulty finding and maintaining a job.

One character in the play was fired from her job for being “stupid” after asking what a mattress was when asked to clean it. The refugee said, “A bed?” as she was unfamiliar with the word and was just beginning to learn English. Her boss replied, “No, a mattress! Are you stupid?” and fired her. Language barriers are another obstacle facing people arriving in America for the first time. However, the play emphasized refugees’ efforts to learn the language.

Another actor furthered the discussed about difficulties in the professional world. One refugee was a doctor in her country, but couldn’t practice in the U.S. unless she went back to school. But, she didn’t have a job or money to feed her family, let alone go to school. Many refugees are intelligent and skilled in professions in their home country, but are unable to perform these jobs in America because of differences in education.

“Don’t take someone you just met for granted but think why did I meet this person?” Said Romuald Mbaissouroum, a refugee from Chad. “Maybe there’s a message there leading to something you don’t know”

Cultural differences is another issue facing refugees upon arrival. For example, the show mentioned the “law of foot,” which states that everyone must stay a foot apart from one another in America. The U.S. is an unfriendly society in comparison to the countries some of the refugees are from. In Iraq, if people are hungry and don’t have food, they can go to someone’s house and be fed without a problem. This is an unlikely occurrence in the U.S.

“Everyone has a story. Everyone has struggles,” actor Ruben Ortiz explained. “The stories are what get me the most.”