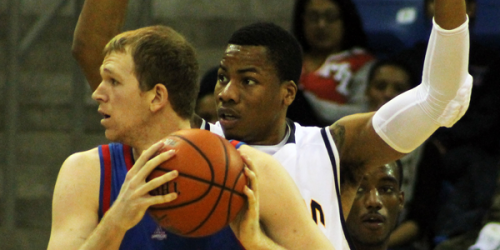 The Quinnipiac men’s basketball team opened up its home season on a sour note as it dropped a nail biter to American University by a score of 61-55.

Free throw shooting was a major problem for the Bobcats in this game as they shot 33 percent from the charity stripe, leaving six free points out there, which happened to be the difference in this game.
[media-credit name=”Katie O’Brien” align=”alignright” width=”300″] 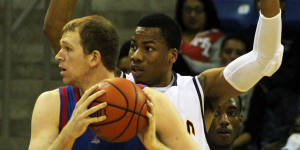 The first half was a tightly contested one. Quinnipiac led early 5-2 when Zaid Hearst scored their first five points, but American came roaring back with a 10-1 run led my three point shots from Kyle Kager and Munoz. Quinnipiac had chances to stop this run several times but could not take advantage of two Azotam steals, as he missed a layup and two free throws. Missed opportunities were a big key for the Bobcats in this game.

Shannon came off the bench in the first half and provided instant offense as he hit two quick three pointers to bring the team back in the game.

“He provided a big spark for us definitely,” Quinnipiac head coach Tom Moore said when asked about Shannon. “I’ve been saying for quite some time now that we are going to need some help on the perimeter, with shooting and ball handling.”

Azotam made his first field goal of the game with less than a minute left in the half to cut the deficit at halftime to one point, 29-28.

The second half was dominated early and often by American University in the paint. Lumpkins and Wroblicky combined to score 13 of the first 14 points of the half in the paint for the Eagles.

Even with American’s domination in the paint Quinnipiac managed to keep the game close, with the help of 20 turnovers from the opposition. The Bobcats had a chance to tie the game at 48 when Johnson gathered a steal and was all alone on a fastbreak but when he went up for the layup he lost handle of the ball.

Quinnipiac had one more chance to tie the score in the last minute of the game when Johnson attempted a 3-pointer with the team down three points, but the shot went off the back rim and Quinnipiac couldn’t recover, despite Azotam scoring six points in the two minutes. American went 5-of-6 on the free throw line in the last minute to ice the game and secure the road win.

Quinnipiac is usually known for its tremendous rebounding numbers, having been second in the nation last season in rebounding, but on this night they only outrebounded American by one, grabbing a total of 28 rebounds.

“Our players did not play disciplined, and American’s players did,” Moore said. “They have good size, we haven’t gone against a team with great size, but their size prevented us from rebounding like we usually do, and it also prevented us from seeing entry passes from the perimeter.”

Coach Moore also questioned his front lines effort in the game saying that many of the guys didn’t play with much effort throughout the game and he was not pleased with the overall play of the team.

The Bobcats’ road games get tougher as they’ll play Friday in the Paradise Jam in the St. Thomas, U.S. Virgin Islands where their first opponent is Iona and have the possibility to play UConn, Wake Forest and George Mason in later rounds.

“We aren’t going to run away from this tournament, this is just going to speed up the growth process of our team,” Moore said.