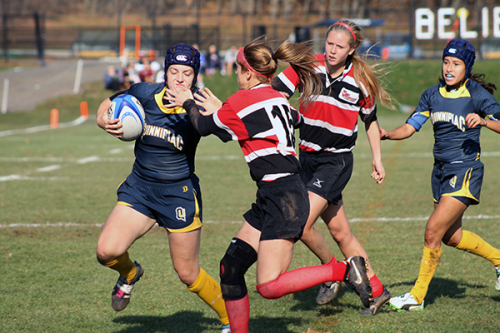 The Quinnipiac women’s rugby team has advanced to the finals of the Tri-State Conference Tournament with a 30-0 win over the Marist Foxes on Sunday. Nancy Dunn, Meghan Hannemann, and Shannon Durkin each scored a try on the day and Natalie Kosko continued her phenomenal freshman season by scoring three.

Ten seniors on the team were honored prior to the start of the game.
[media-credit name=”Katie O’Brien” align=”alignright” width=”300″] 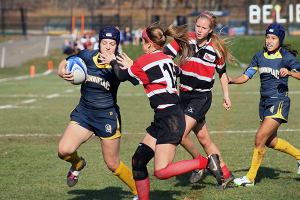 [/media-credit]
“It was an unreal experience,” senior captain Colleen Doherty said. “For most of the seniors this will be the last game they play on Quinnipiac’s rugby field and they were determined to make it one to remember.”

Seniors Dunn and Hannemann both scored tries on the day, but the senior party was crashed by freshman Natalie Kosko. Kosko continued her phenomenal freshman season by scoring a game high three tries on the day.

It was a very emotional game for the Bobcats. Not many teams experience Senior Day and a playoff game at once, but due to Hurricane Sandy that was the case. That emotion was magnified when the Bobcats pulled out the win.

“We are still honestly in shock about it. It’s something we’ve worked for the whole season and now that it’s finally here it’s an amazing experience” said Doherty.

This was the first game the Bobcats have played in two weeks after their game against Rutgers was cancelled during Hurricane Sandy.

“We had to maintain our fitness. This is a game where if you are not in the absolute top shape its miserable. And you could see a little bit of that in the second half,” coach Carlson said.

In the second half the Bobcats trailed off a little, only scoring one try compared to five in the first. However, it was the defense that was key especially in a key stop on their own goal line early in the second half that kept Marist from scoring.

“That was all mental power,” Doherty said. “We just didn’t want to let them over that line and we all came together as a team and held that line.” That key play kept the shutout alive, the Bobcats sixth this season.