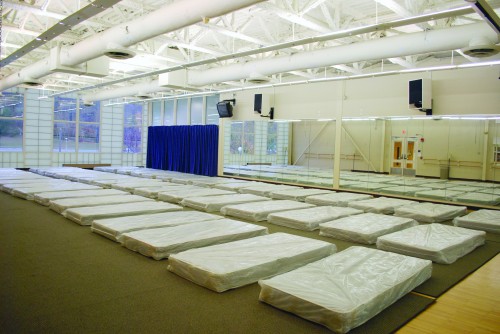 Quinnipiac’s Mount Carmel campus was unusually quiet this past week after students either went home or stayed indoors in anticipation of Hurricane Sandy. 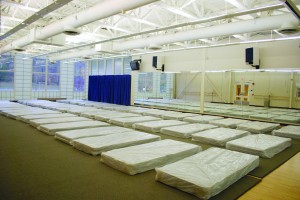 [/media-credit]The hurricane hit Hamden on Monday, Oct. 29, and the lights went out in the few residence halls without generators: Larson, Perlroth, Troup and Complex.

Students in these buildings were warned that if the campus lost commercial power they were without generators. The university cancelled classes for Monday, Oct. 29, and Tuesday, Oct. 30, so that students would have the time to go home before the storm, Associate Vice President for Public Relations John Morgan said.

Resident Assistants in these residence halls encouraged students to leave campus, move in with a friend or stay on mattresses set up in the Recreation Center Wednesday night because of the extended power outage and dropping temperatures, Associate Director of Residential Life Melissa Karipidis said.

Although the Recreation Center was prepared for students, no students chose to stay there as an alternative, Morgan said. The mattresses were then loaded back up and sent away last Thursday morning.

Freshman and Perlroth resident Erica Posadas attempted to wait out the storm for the first two days without power and used friends’ showers, printers and electricity to get by. She says the temperature in her room was not a problem initially; instead, finding places to study at night while the library was closed was a challenge.

When she found out power would potentially not be restored until the following Monday, the temperature in Perlroth and her room decreased, and she heard her RA’s suggestion to leave, Posadas decided not to go to the Recreation Center, but instead to leave campus.

“I feel like [Residential Life] was just trying to do their best,” she said. “And I think the best thing was for us to go home.”

Although Posadas says the university offering the Recreation Center to students was a good idea, she says that her friends were going home to houses with power, hot water and food, and she figured that would be more enjoyable.

“I felt like that would be more comfortable than waiting it out in a Rec Center,” she said. “People always think the Rec Center is really dirty and smelly so they probably really wouldn’t want to sleep there. I’m sure people are so used to having more privacy than they would sleeping in front of strangers.”

Sam Nicol and Simon Hinde live in Complex and were also advised to leave but, unlike Posadas, they chose to stay. Going home was not an option for Scotland native Nicol and Australian native Hinde.

Both play for the men’s soccer team and they decided against staying in the Recreation Center because the team had its final two Northeast Conference games that were still scheduled for Friday and Sunday of last week.

“There was no way we could have lived with like 30 other people and played [soccer] at the same time,” Nicol said. “We were allowed to stay if we wanted to, by choice, so we ended up just staying.”

Hinde says the Recreation Center was a good housing alternative even though he and Nicol did not take advantage of it.

“Considering the conditions, it’s not bad with single mattresses,” Hinde said. “But being an athlete before some really important games, it’s not appropriate.”

Despite living for four days without power, Nicol and Hinde say they made the most of an interesting experience.

“We had a good time,” Hinde said with a smile.

“It was a good laugh,” Nicol added. “We don’t experience this back home.”