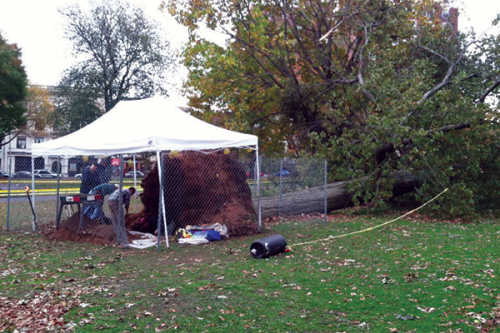 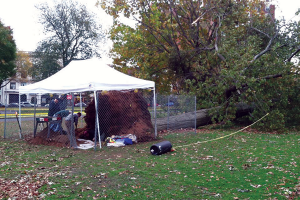 [/media-credit]Skeletal remains of a skull, spine and ribcage from at least two people resurfaced on the New Haven Green when the tree fell, according to the New Haven Register. However, after a brief investigation the medical examiner determined the bones were centuries old.

The New Haven Green was used as a burial ground for the local church in the 1700s and it’s believed that’s where these bone fragments came from, according to the New Haven Register.

Yale Anthropology Laboratory Manager Dr. Gary Aronsen will continue researching the fragments, but Bellantoni said it may be two months before the lab work yields any information.

The “Lincoln Tree” was an oak and was planted by the city in 1909 to commemorate the 100-year anniversary of President Abraham Lincoln’s birthday.