A personal account in the wake of Hurricane Sandy

The small island of Queens, N.Y., called Broad Channel, is below sea level, and my home. The town is accustomed to streets flooding during a high tide and full moon, so when it was announced that Hurricane Sandy would hit the Northeast, no one was worried. 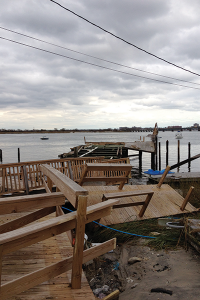 Though citizens were ordered to leave their homes, not many people evacuated. They thought the rumors of Sandy’s potential danger were all hype, thanks to Hurricane Irene’s minimal effects the previous year. No one packed away their pictures, home movies or expensive electronics. Everyone stayed in that night and waited for the storm to hit, hoping for the best. Finally, Hurricane Sandy released her wrath.

Beginning the night of Oct. 29 through the morning of Oct. 30, record-high winds howled, rain pounded on rooftops, trees fell down, and power went out. The next morning was chaos. The 20-block island still looks like a war zone. Nearly everyone’s home was flooded. One-story houses were completely destroyed, and houses with basements were “luckier” since water filled the basement before reaching the first floor.

Family members and friends had five feet of water in their one-story houses. Everything they owned was soaked through, and much of it isn’t salvageable.

My grandmother’s two-story bungalow stood 30 feet out on Jamaica Bay and was destroyed. The home was 100 years old and has been in my family for nearly 40 years. Her home, and my favorite place in the world, collapsed on itself and floated away. 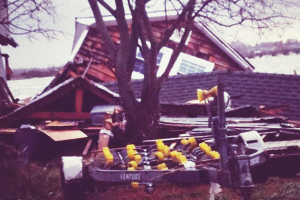 My boat, along with five of my family members’ boats, were washed out of the bay, some ending up on streets. Two now reside in the middle of the road, two more a few blocks over, and another in someone’s back yard.

My basement flooded with seven feet of water. The current’s force flipped over my washing machine, dryer, piano and couch. It completely soaked our childhood toys, trophies and pictures. We spent three days laying everything out to dry.

My yard was completely submersed in water by the bay, and crabs and dead fish blanketed it.

Everyone in Broad Channel and the surrounding towns, such as Rockaway Beach and Breezy Point, are without power, heat and hot water. According to the New York City Fire Department, Breezy Point suffered more than 100 house fires, caused by the flood waters clashing with electric cables. This was the most the FDNY has ever seen in one area at one time. A church in Rockaway Beach burned down, along with many houses and stores. Because the streets were completely flooded, firemen found it nearly impossible to put out the flames.

All we can do now is hope and pray for and work toward recovery. The residents in my town and those around me feel that the government, including Mayor Bloomberg, isn’t doing enough to rebuild. Thankfully, residents are helping one another by cleaning houses and providing food. These New York towns have recovered from serious problems before, and I know they can do it again.