This is me: The Veteran 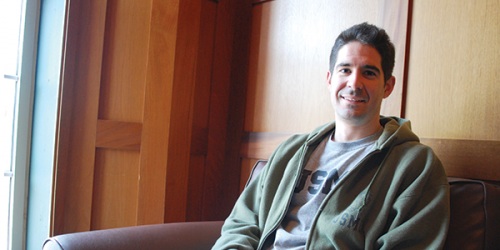 26-year-old senior, Steve Vesce, jserved in The Marines before coming to Quinnipiac.

Four years ago, Steve Vesce drove through the middle of the desert, the nighttime sky extending for miles in the distance. There were no other cars around, only identical 10-story buildings. It was quiet, except for the minarets. The Muslim “Call to Prayer” rang from the mosque, sending an eerie chill through Vesce.

The drives in Fallujah, Iraq, where the veteran Marine was stationed, were uneasy ones. The thought that something could happen at any minute got to Vesce.

“Driving through a downtown area in the middle of the night is not a place you want to be,” Vesce said. “You don’t know what to expect, so naturally, you fear everything.”

Vesce, a 26-year-old senior at Quinnipiac, turned his fear into awareness and understanding. Enlisting in the Marines right out of high school taught him a lot of life lessons, he said.

“They really just motivate you to understand wherever you come from, wherever you are,” Vesce said. “You can succeed and you can do whatever you want as long as you work hard enough at it.”

After high school, Vesce felt college wasn’t the best fit for him, so he searched for alternatives in the workforce. He also spoke to recruiters, and eventually landed on the Marines.

“I had no clue what to expect,” Vesce said. “I didn’t know anything about the military before I went in – just that it was tough, challenging and you got to see the world.”

Vesce landed all over the place. His journey started in Parris Island, S.C., for bootcamp. Thirteen weeks later, he graduated as a squad leader and traveled to Fort Sill, Okla., for military combat training. There, in Military Occupational Specialty (MOS) school, he learned rucking and artillery.

Soon after, he was stationed in Hawaii. Though his unit stayed on the island of Oahu, it traveled to the mainland for months at a time to fire artillery since Oahu was too small. Today, Vesce is an athletic build, but when he was a new recruit, he said he weighed roughly 140 pounds and struggled to keep pace.

“I would not be able to keep up with the pack, so I had to work hard to do that,” Vesce said. “I was never really outspoken or aggressive. The Marine Corps kind of made me that way, so at first it was a hostile environment. There were always people pushing you.”

After three months on Oahu, Vesce traveled to Camp Hansen in Okinawa, Japan. His unit split seven months there, between artillery training near Mount Fuji and physical training and live fire drills in Tokyo and Roppongi.

In January 2006, he made his first trip to Iraq in the city of Fallujah. This was the site of Operation Phantom Fury, a battle in late 2004 causing 1,200 deaths, and Vesce said he fought with Marines from the unit in Fallujah during the battle.

A city less than an hour away from Baghdad, Fallujah was a target at first. On Vesce’s second day there, incoming mortar shells were fired at his base. His unit handled it and survived, diving into a concrete bunker. Vesce’s platoon commander, Garrett Exner, took notice of how  Vesce handled himself during his time in Iraq, and also saw his leadership qualities.

“I like to think I helped all my Marines succeed,” Exner said, “but Steve was just more driven than the average. He’s motivated by challenge and responsibility. The more I challenged him with larger and larger tasks, the more he thrived.”

Though Vesce wasn’t physically hurt while stationed in Iraq, the constant anticipation of combat began to sink in.

“All of your senses, you become very keen to everything around you. You’re always on edge, you’re always alert,” Vesce said. “The first time that you actually go outside the wire with your unit, you drive outside the wire from the base into hostile territory, that’s when it really hits you.”

Before Vesce went on a mission in Iraq, a truck hit an improvised explosive device (IED) and detonated it. He would have to go on “fib runs,” in which he’d detain an insurgent and drive them into the heart of Fallujah to the police station.

“You don’t know when or where it could come. That was probably the most taxing part of it,” Vesce said. “…That first time, your whole body just kind of tingles. You’re like, ‘this is real, you could die.’ It’s a sobering experience. It really kind of makes you appreciate the life that you have.”

In the military, Vesce learned that once you’re there, anything could happen, and there is no time to think.

“You would be driving down the road and you don’t know when you would hit a bomb or when someone was going to shoot at you,” Vesce said. “When it does, you don’t think, you just act, and everything is reactionary. Reacting is second nature to you because you train so hard for it.”

Vesce saw a lot in Iraq, including a 5,000-gallon tanker truck running over an IED and exploding. Four vehicles were struck during his deployment. Luckily none of them were his.

“Everyone’s involved, regardless of whether or not it’s your truck,” Vesce said.

Vesce was also in charge of the convoy security platoon, and helped train the Iraqi police in operations, such as how to perform searches and raids. The responsibilities didn’t entail violence, but rather assistance in order to build the country back up.

He became more of a leader as time went on. He was a squad leader and an assistant section chief during his service. His other duties included weapon training, convoy navigation and policy making.

“Steve is what officers call a ‘Fire and forget Marine,’” Exner said. “It basically means that given him a task, regardless of complexity, he’ll find a solution and the leadership doesn’t have to supervise too much.”

Vesce’s first stint in Iraq ended seven months later, and he was sent back to Hawaii for more than a year for laydown time. In July 2008, he returned to Iraq, this time to Al-Taqaddum, less than 17 miles away from Fallujah. He spent much of that time transporting goods and personnel. Al-Taqaddum was a lot quieter, as his unit didn’t engage in much combat. This allowed Vesce to become more understanding of the Iraqi people and their background.

“I had a level of comfort with the Iraqi people, that they weren’t all out to get us,” he said.

He left Al-Taqaddum in February 2009 and ended his service. He could have gone to Afghanistan and done more artillery work, but that would have entailed changing units and adapting to an entirely new style of work. He chose to leave the service and, per Exner’s advice, used his G.I. Bill and enrolled at Quinnipiac in Fall 2009.

“Every Marine should get at least a Bachelor’s (Degree). It opens up so many doors for them,” Exner said. “… Marines have learned how to manage tasks, maintain self discipline, and manage stress effectively. These traits relate to success in any future endeavor and gives former Marines a leg up on students straight out of high school.”

Vesce remembers sitting in his QU101 class as a freshman with a full beard, receiving different looks from his peers. His advisor, Sean Reid, associate dean of the School of Business, has worked closely with him since his freshman year.

“…His experience in the Marines has obviously given him a perspective on life that the typical college student doesn’t have,” Reid said. “Not better or worse … just different.”

Reid, who is a Navy veteran, has worked with Vesce regarding coursework rather than discussing time in the service. He said he’s seen a high level of maturity in Vesce. Vesce was in Reid’s SB101 class as a freshman, and although hasn’t necessarily taken Vesce under his wing, he’s taken an interest in his development as a person.

“At this point in his career as a student, and the fact that he is already a very mature young man, he doesn’t need a whole lot of ‘coaching’ and can take pretty good care of himself without much help from me or anyone else,” Reid said. “I have enjoyed working with him very much. He is a very serious student.”

Vesce hasn’t dismissed the idea of going back into the service. He was an accounting intern for the American Chemical Society in the summer of 2011 and plans to graduate in six months. But wherever he goes, he has the drive to succeed.

“[Vesce] knows exactly where he wants to go in life and is willing to do what it takes to get there,” Reid said.