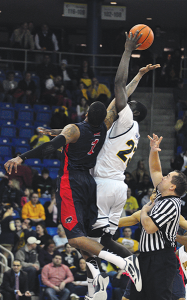 [/media-credit]is for quite some time while coaching, but every year we do something different in terms of how we vote and nominate our captains,” Fabbri said. “They were clearly our captains so it was nice that everyone was on the same page with our leadership going forward.”

The women’s team was selected No. 1 in the NEC Preseason Coaches’ Poll, ahead of Sacred Heart and Monmouth, taking 7-of-12 first place votes.

“Being picked No. 1, I think shows a respect to our roster, the players we have returning, and coming off a good season,” Fabbri added. “But in the long run, it’s a piece of paper with a vote and it does not mean that is going to happen…but that is what we are striving for in the end.”

Four of last year’s five starters are returning, including last year’s NEC Defensive Player of the Year and All-Conference First Team selection, senior Felicia Barron. Martin was also named an All-Conference honoree and a member of the 2011-2012 NEC All-Rookie Team.

“We worked really hard in the off season. Last year our team was pretty young with six freshmen,” Abshire said. “But this year with a year of experience under our belts, we’re expecting big things. For me personally at the point guard position, it’s a lot easier this year because I have the offense down pat. There are no questions on where to go, just getting better from here.”

“We have a lot of weapons, we have depth, we have key players that are good in key positions,” Fabbri explained.

Their non-conference schedule will help the Bobcats get ready for their NEC opponents by playing teams like James Madison, Rhode Island, Massachusetts, Yale, New Hampshire and St. John’s (N.Y.), who made it to the Sweet Sixteen of the NCAA tournament last season.

Fabbri hopes her players can handle the overall expectation of winning an NEC Championship this season, which she believes the team was unable to handle last season.

“We have the staff and the team to absolutely accomplish getting to the NEC Championship game, cutting down the nets for the first time and putting Quinnipiac on the board,” Fabbri said.

The Bobcats begin their regular season schedule on the road on Sunday against James Madison.

Men’s basketball
Quinnipiac men’s basketball head coach Tom Moore has great expectations for this season.
“I’m happy of how we look so far,” Moore said. “We have very good upperclassmen, Jamee Jackson, Dave Johnson and Garvey Young in particular are seniors, that have done a good job leading this group.”

The men’s team is coming off a season in which it went 10-8 in NEC play and ended with a total of 18 wins, as well as a third straight national postseason tournament. Moore hopes that it can improve against NEC opponents and move up higher as the season goes on.

“I thought last year’s team had the potential of being a 14-4 or 13-5 team (in conference) as we were disappointed of the outcomes of the two St. Francis (N.Y.) games and the two played against Sacred Heart,” Moore said.

The men’s basketball program was selected No. 4 behind LIU-Brooklyn, Robert Morris and Wagner in the NEC Preseason Coaches’ Poll.

“Because we have done better in the Northeast Conference in the last three years and went to three straight postseason tournaments, our name is continuing to get a little more nationally recognized among mid-major programs,” Moore said.

Moore’s roster features 10 returning players, including four starters. Five of these players also have at least 20 career starts to their resume.

The frontcourt looks to be the strongest part of the team, consisting of Ike Azotam, Ousmane Drame and Jackson. Azotam and Drame are coming off seasons in which they earned All-Northeast Conference selections. As for Jackson, he hopes to stay healthy after nursing a foot injury for most of last year. Other big pieces of the frontcourt include sophomores Marquis Barnett and Justin Harris, who hope to make contributions with bigger roles.

“We expect to play with anyone out there and I think our frontcourt can play with any other frontcourt around the country,” Moore said. “It will also be a great test for our guards early on to see where they are.”

Quinnipiac’s backcourt will have a tough job this season replacing the school’s Division I scoring leader, James Johnson. Moore hopes that his two senior guards, Dave Johnson and Young will be big leaders for the Bobcats. Sophomores Zaid Hearst and Evan Conti will also contribute a large number of minutes.

Moore is working hard to make improvements for his squad, especially with running a better half-court offense by creating more looks and shots. He also wants his players to get more offensive chacnes off turnovers and in transition.

“We pride ourselves on rebounding, playing more tough defensively, and being more efficient on the offensive end,” Young said.

Young believes that this year’s non-conference schedule will really help them with preparing to face conference teams.

“Our out-of-conference schedule gives us many teams with a variety of different strengths and weaknesses and by the time we get to our conference, we will have a good routine of how to prepare for our games,” Young said.

The men’s team is set to open its season at the Connecticut 6 Classic on Saturday, when it takes on  Hartford at 3 p.m. in West Hartford, Conn.