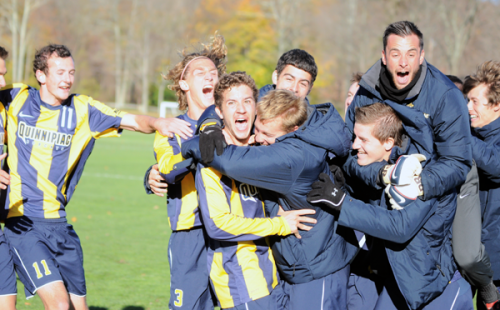 For the past two seasons, the seniors of the men’s soccer team have been unable to celebrate senior day in winning fashion. On Wednesday, the class of ‘13 did much more than just win.

The Bobcats began senior day with a matchup against Fairleigh Dickinson with first place on the line. The day ended for the seniors and the rest of the team as NEC regular-season champions, a first for the program thanks to a 3-0 victory.

“Winning for the first time in school history, you can’t describe the feeling,” senior William Cavallo said. “From the past two years to where we are today is phenomenal.”

This season, Quinnipiac finished with an overall record of 10-5-2, the most wins in program history. It ended the regular season on a six-game win streak and an 8-1-1 record over its last 10 games.

During the six-game win streak, the Bobcats outscored their opponents, 15-2. Sophomore goalie Borja Angoitia has registered four shutouts during the streak to bring his season total to five. He was also named the Northeast Conference Player of the Week last week.

“It’s a great achievement for the team and I’m proud of these boys for the effort they put in all year,” Quinnipiac head coach Eric Da Costa said. “We started off not as well as we would have liked to in non-conference play knowing we had a difficult schedule but the boys believe in each other. They kept believing in what we do and how we play and they persevered and the results where we stand is where we are now.”

The Bobcats biggest challenge of the season was this weekend when they faced the two teams atop the conference in Central Connecticut and Fairleigh Dickinson.[media-credit id=1459 align=”alignright” width=”300″] 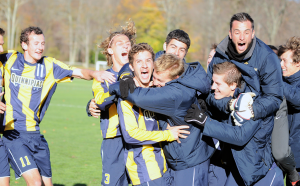 On Friday, Quinnipiac defeated Central Connecticut to move into first place in the conference. However, Fairleigh Dickinson also won which made Sunday’s game a must-win for the Bobcats if they wanted to host the NEC tournament.

Thanks to two goals from William Cavallo and the play of the rest of the Bobcats, they defeated the Knights, 3-0, and won their first-ever NEC regular-season title. They will host No. 4 Saint Francis (PA) on Friday at 11 a.m. in the semifinals. The other semifinal game will be between No. 2 Fairleigh Dickinson and No. 3 Monmouth at 1:30 p.m.

Although Central Connecticut finished fourth overall in the conference, it has a playoff ban for this season due to Academic Progress Rate which measures the classroom performance of Division I teams.

The last time Quinnipiac was in the NEC tournament was in 2009, when it fell in the championship game to No. 8 Monmouth, 2-1. In that season, this year’s senior class were freshmen giving them six players with postseason experience.

“Coming in as a freshman, you take it for granted,” senior captain Philip Suprise said. “You think, ‘oh, you’re going to get there, it’s pretty easy.’ But after you struggle for two years, you try to get back to the NEC tournament…everything finally clicking together it feels really good.”

“They picked us to finish eighth in this conference, we finished first,” Angoitia said. “The beginning of the season was a little slow but now we’ve stepped up. We just gotta keep playing the same way. We don’t have to think about the NECs; it’s just another game. Another game in our season and we have to play the same way.”

If Quinnipiac is to beat Saint Francis and move on to the championship game, it will face a tough task even as the No. 1 seed.

Sunday’s win over Fairleigh Dickinson improved its overall record to just 4-14 against the Knights and was its first win against them since 2009. The Knights had also been on a roll, allowing just two goals over their previous eight games before the Bobcats’ three-goal explosion on Sunday.

“They are a good team and they are going to be a dangerous team in the playoffs and definitely be a contender,” Da Costa said. “We had a lot of respect for them in terms of our history with them. They’ve always been a difficult opponent for us and for what coach (Seth) Roland does for them over there.”

Monmouth is also a very dangerous opponent coming into the tournament looking for its fourth straight NEC tournament title. It also won 11 games this season overall, the most in the conference. One of those 11 wins came against Quinnipiac as it defeated the Bobcats, 3-0, at home for Quinnipiac’s worse loss of the season.

The winner of the NEC tournament will get a bid into the NCAA tournament, which would be the first trip for Quinnipiac’s program. The Bobcats have a 5-3-1 record at home this season and will look to continue to make history.

“Hosting also comes with its fair share of distractions as well,” Da Costa added. “But we get to sleep in our own bed and wake up a little later and be in our own surroundings and play in front of our fans and that’s something we are very proud of.”