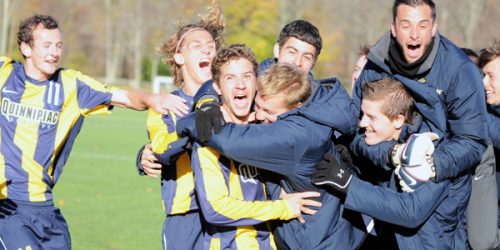 For the past two seasons, the seniors of the men’s soccer team have been unable to celebrate senior day in winning fashion. Today, the class of ‘13 changed that.

The Bobcats began senior day with a matchup against Fairleigh Dickinson with first place in the Northeast Conference on the line. The day ended for the seniors and the rest of the team as NEC regular-season champions, a first for the program thanks to the 3-0 victory. 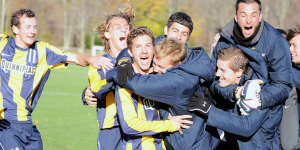 [/media-credit]“All of the seniors got together before the game and said we’re not going to lose in our last regular season NCAA game,” senior captain Philip Suprise said. “It’s not going to happen. We really carried that into the performance that we had.”

Quinnipiac will host the NEC Tournament as the No. 1 seed and face No. 4 Saint Francis (PA.) while the other semi-final game will be between No. 2 Fairleigh Dickinson and No. 3 Monmouth. Both games will be played on Friday and the championship game will be Sunday, the times of all games has yet to be determined.

Senior William Cavallo got the Bobcats on the scoreboard first in the 29th minute. Suprise chased a ball down near the left sideline and won possession over a Fairleigh Dickinson (9-5-4, 6-1-3 NEC) defender. Suprise then sent a cross to the left post and Cavallo flew in with a diving header that beat Knights goalie Jacob Lissek.

After a slow start, Cavallo’s goal sparked the Bobcats who controlled the majority of the possession for the remainder of the half.

Twelve minutes later, the seniors cast more magic. Robbie McLarney launched a ball from midfield into the 18-yard box which Suprise and a defender chased down. Lissek called off the defender and sprinted up from his line. The ball landed between the defender and Lissek with just enough space for Suprise to take advantage. He deked to the left of Lissek and buried it to the far corner for the 2-0 lead and his third point of the game.

Cavallo added his second goal of the game and third of the season in the 81st minute to extend the lead to 3-0 and ultimately seal the championship.

“To have that opportunity, (number) one versus (number) two, this is stuff you dream about,” Quinnipiac head coach Eric Da Costa said. “Games that you want to play in and to win the way we did, the boys did everything that they had to do and I’m really proud of them.”

The last time Quinnipiac was in the NEC Tournament was in 2009, when they fell in the championship game to No. 8 Monmouth 2-1. In that season, this year’s senior class were only freshman.

“Coming in as a freshman you take it for granted,” Suprise said. “You think oh, you’re going to get there, it’s pretty easy. But after you struggle for two years, you try to get back to the NEC Tournament…everything finally clicking together it feels really good.”