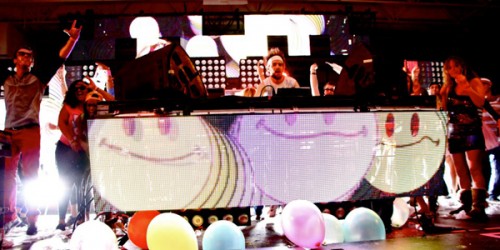 A video of fire lit up the screens as Gregg Gillis, better known as Girl Talk, approached his laptop and massive setup of equipment on stage. The music became louder and louder, and as Gillis began his first mashup, the crowd quadrupled its energy. Then, hundreds of balloons fell from the ceiling.

Within minutes, the crowd of nearly 500 at the Student Programming Board’s fall concert became completely lost in the music on Oct. 27. Groups of students were invited to dance on stage, and countless rolls of toilet paper were blown and unraveled into the crowd, creating another dimension of interaction.

Gillis was just as excited as the crowd, despite the smaller-than-predicted turnout. At certain points of his set, he left his laptop and danced with those on stage. Heads were banging, arms were flailing, and everyone sang along with the blend of current hit songs and old favorites.

“The whole show was amazing,” junior Shannon Savage said. “It was one giant sensory overload. I think this may have topped the Ke$ha concert from a few years ago.”

Toward the end of the set, the sensory effects somehow topped themselves as confetti cannons blasted the audience, lending colorful photos to the Instagrammers in the crowd and catapulting the energy level higher than before.

Sophomore Allie Penta was nearly speechless in the moments following the concert.

“Girl Talk put on an incredible, high-energy set!” Penta said. Watching countless people dance around the Rec Center was so fantastic to be a part of. It’s a shame that more people didn’t come because they really missed out on something special.”

Eccentric British solo act, Neon Hitch, opened for Girl Talk. Her quirky outfit of wings and a skin-colored bodysuit with black stripes was admired almost as much as her pop performance.

Although the crowd was small in the beginning, they didn’t hesitate to show their love. When Neon Hitch played her hits, “Ass Back Home” and “Love U Betta,” the crowd screamed. Toward the end of her performance, Neon Hitch brought Matt Francia, an executive board member of the SPB, on stage.

“The night was an absolute success,” SPB’s mainstage chair, Anna McAvinchey, said. “At one point of the show, I was able to watch the concert from above everyone on the track and got to see the whole audience so into the music. At that point, everything came together for me.”