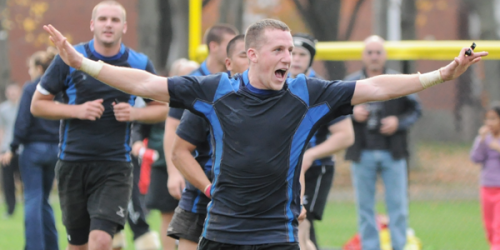 For the first time in more than 10 years, the New Blue rugby team took the field at the Mount Carmel Campus at Quinnipiac University. The opportunity to play at Quinnipiac campus along with the home crowd and the playoff atmosphere was a surreal feeling for New Blue Rugby captain Joey D’Apice.

And with a championship on the line now, the team might get another chance to experience that same feeling.
[media-credit name=”Matt Eisenberg” align=”alignright” width=”300″] 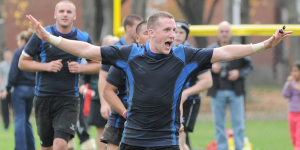 [/media-credit]
Playing its first game at Quinnipiac since the program became unaffiliated with the university, undefeated New Blue Rugby put on a show on Saturday. They defeated Western Connecticut State University, 48-7, at the intramural field behind the baseball field, to advance to the New England Wide Collegiate Rugby Conference championship game next Saturday, perhaps another chance for the team to show a university crowd what it has to offer.

The team had played “home” games in Cheshire, Hartford, East Haven and West Haven, but nothing compared to playing on campus.

“It was a perfect setting for us,” New Blue senior Jimmy Cappadoro said. “The fans were just out here from the beginning. They were loud, they were screaming at us, it’s what we’ve been waiting for for the past four years. … The fields came out great, gotta thank Facilities for that, Athletics putting this all together and it was awesome.”

The entire event was something the team had been working toward for years and after discussions with the Quinnipiac Athletic Department, the team was able to play on an actual field they can call home.

“I’ve been dreaming about this day since I came here,” New Blue captain Pat MacLellan said. “Just to make it actually come true is amazing.”

New Blue earned support from a lot of its alumni and student body. Quinnipiac Associate Athletic Director of Intramurals Mike Medina, who watched the game, said he saw at least 500 people show up in support of the team.

“It was a great crowd and a very supportive student crowd that we saw today, so we’re really excited about that,” Medina said.

Jimmy Whelan, last year’s team captain who has acted as a coach this year, said that playing on campus in front of fans was going to bring the program to new heights.

Boy, was he right.

MacLellan scored two trys, while Cappadoro, Nick Buondonno, Marc Villalongue and Ross McMahon each scored one. Villalongue converted on all six of his extra points and made two penalty kicks.

The team raced out to a 27-0 halftime lead and scored two trys in the first three minutes of the second half to score 41 unanswered points.

“We’ve been so excited to play this game. We’ve been waiting 10 years for this one, and we showed up,” MacLellan said. “Everyone came to play.”

Medina said New Blue made it easy on his part to set up the game and make sure everything went smoothly.

“Everything that we expected of them as a club was phenomenal,” Medina said. “They ran a first-class organization today and proved, I think, that they can contribute a lot to the Quinnipiac community.”

While Whelan spoke with friends after the game, one of the campus public safety officers came up to him.

“You guys are playing here next week?” the officer asked.

“I don’t see why not after today,” the officer said.