This is Me: The Scholarly Skater 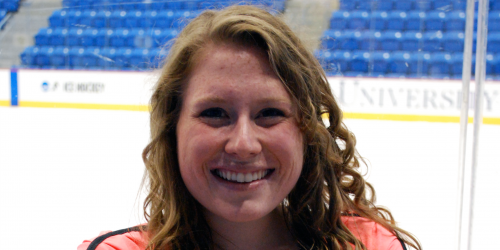 Senior Meghan Speranzo was a competitive skater for 17 years.

Meghan Speranzo can feel her nerves build as she laces up her skates. She knows she shouldn’t be worried. She knows the moves. She’s practiced and competed with the moves since January. She’s followed every aspect of her pre-competition ritual:

A big pasta dinner the night before, watching Vin Diesel’s “The Pacifier” before coming to the rink, snacking on plain M&M’s and sipping Coca Cola from a cup out of a straw, no bottle. Her makeup is done, and it only took four attempts for her mom to secure her hair into a bun with a Hairagami. 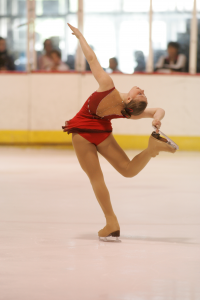 Once she finishes her M&M’s and Coke, she waits for the comforting pep talk from her mom, just as she does every time before she takes the ice.

“We would just tell her to go out and do the best she could at that particular moment. If the best she could do that day is fall on every jump, it would still be okay with us,” Speranzo’s mom, Bobbie, said. “Her dad told her ‘It’s just another day at the rink’ at every competition.”

But this time is different. It’s her last competition before she starts college. She’s also representing Quinnipiac in Anaheim, Calif. at the National Collegiate Championships,
where recently accepted college students showcase their talent.

“It was just that anticipation of me needing to get out there,” Speranzo said. “Usually, once I got out there, the music started and once I did that first jump-pass, I was fine. I just needed to get through that jump-pass, and then at this point, it was ‘Okay, here we go. We’re already in it, so let’s just do it.’”

Speranzo, a competitive figure skater, started skating at age 3 and competing at age 5. She has traveled around the United States to skate in at least seven different locations per competitive season, lasting from January to October. She’s been to Colorado, Massachusetts, California, Pennsylvania and Las Vegas to name a few, and she has earned her share of medals and trophies.

“I don’t like to broadcast it, but at the same time, in those moments when I’m alone and can look back on it, I think, ‘I really was good.’ It’s weird that you don’t really come to terms with that until after you’re done,” Speranzo said.

In the 17 years she competed, Speranzo was known as the “figure skater” by her classmates and had little time for school-sponsored activities since practices and competitions took up so much of her day.

Both Speranzo and her sister, Jamie, participated in figure skating. According to Bobbie, Speranzo liked to tag along with Jamie, who is five years older, with whatever she was doing.

“She always wanted to be doing what her sister and her sister’s friends were doing,” Bobbie said. “This carried over into skating in that she would try to do what the older, more accomplished skaters were doing.”

It’s evident that once the Cave Creek, Ariz. resident focuses her mind to a task, she sets out to accomplish it. She doesn’t let anything stand in her way. Figure skating allowed her little time to socialize at football games or participate in school sports, but it helped shape her into the person she is today.

“I like to try to tell people like ‘Oh, I’m bulletproof,’ because I’m so narrow-minded and focused on something when I’m doing it so I think that, in a lot of ways, it gave me my personality,” Speranzo said.

At age 9, Speranzo and her family moved from Minnesota to Arizona when her dad was relocated for his job. There they found Doug and Lara Ladret, a husband and wife coaching team. They were able to give Speranzo the push that she needed, and became like a second set of parents to her, Speranzo said. They went through every up and down together, and read her mind simply by the expression on her face.

“It was just one of those things that just worked,” Speranzo said. “I just loved them. I could not part from them. There were times when we just bashed heads, but at the same time, I would never have been able to let go of them.”

Not only did figure skating help her gain a special relationship with her coaches, it helped bring her family closer together. With two daughters in the family competing, the Speranzos spent a lot of time at the rink together.

“It became [my parents’] lives too, even though they weren’t the ones that were doing it; they were just sitting in the stands,” Speranzo said. “I think overall, it’s something that my family will always share, that experience of us competing and stuff like that. It was time that we were able to spend together.”

Spending so much time on the ice, as well as in the car traveling 30 minutes from practice to school, Speranzo had little time on the ground.  Most weeks, she’d practice Monday through Friday with extra ice workouts on Saturday. Depending on what events were coming up, she’d be practicing or working out 30 to 35 hours a week, and spend more time in her skates than out of them. Speranzo said she’s still more comfortable in the rink despite quitting the sport four years ago when prioritizing education over sports.

“I’m so much more comfortable on [the ice]. I don’t know why,” Speranzo said. “I still go when I’m home from school, and I love it, but it’s weird because my lack of coordination on the ground is quite frightening compared to what I can do when I have centimeter blades on my feet.”

Despite her ability on the ice, Speranzo also had her fair share of injuries, from persistent knee injuries, forcing her to wear a brace while skating, to a broken foot that should’ve kept her off the ice for six to eight months. But, Speranzo pushed through.

“You grow such a pain tolerance that you don’t want to admit that you’re actually hurt and you will tolerate so much pain because you don’t even want to think about not being able to go on the ice,” Speranzo said.

Speranzo still misses skating, but tries to fill the void with other activities. Since coming to Quinnipiac she’s redefined herself from figure skater to college student, joining school-sponsored organizations for the first time. She’s an orientation leader, a member of PRSSA and SPB’s Mainstage Committee, the recruitment chair for Lambda Pi Eta Communications Honor Society, and in a sorority. She also began writing a book entitled “The Line,” symbolizing that there’s always a line people shouldn’t cross, Speranzo said. It discusses her experience in an abusive relationship in high school.

Speranzo said her busy schedule helps her adjust to life without figure skating. She’s become a long-distance runner, as well, and is training for a half marathon. Since she doesn’t skate in Hamden, running allows time just for herself.

“I always tell people that that’s my ‘me time,’” Speranzo said. “That’s my two hours out of the day that I’m not talking to you, don’t text me, don’t call me, don’t email me, nothing. That’s my time.”

As for the future, Speranzo wants to remain in sports. Her ideal career would be working for a corporate public relations firm for an athletic or fitness-related company. No matter what path she takes, Speranzo’s experiences as a competitive figure skater will always follow her.

“Skating was the best way for me to learn how to deal with success and failure, as well as understand that you need both to live a life that has depth,” Speranzo said. “I would not be who I am without my skating career. It is the reason for every ounce of physical and mental strength I have. Sports help us realize that like everything else in life, there are good times and bad times.  In the end it’s about relishing in the good, pushing through the bad, and having good people around to support you in between.”