Lahey honored as “Irish Person of the Year” for lifetime contributions to Irish culture, Museum 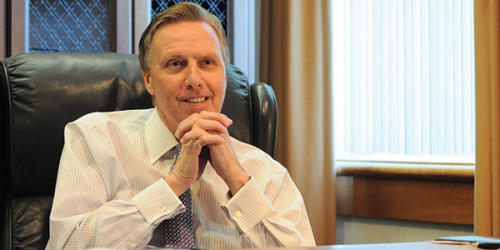 Quinnipiac President John Lahey has recently added another distinguished honor to his long list of achievements. 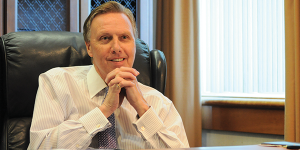 He was honored as “Irish Person of the Year” at the 2012 Irish Leaders of New England Awards for his contributions to the Irish community and historical memory, as well as for his work in creating Ireland’s Great Hunger Museum, Músaem An Ghorta Mhóir.

Lahey, who has served as president of Quinnipiac University for more than 25 years, was presented with the award on Oct. 11 at a ceremony at the Irish Consulate in Boston.

“It’s a tremendous honor to receive this award,” Lahey said. “I was surprised that I was recognized in Boston. I have been previously honored in New York, but I hadn’t known that people in Boston knew me. They were well aware of the museum, which I found to be remarkable.”

The creation of the Great Hunger Museum, which also opened Oct. 11, has been celebrated nationwide. The opening was featured in articles from The Irish Times, The Los Angeles Times and The Chicago Times.

“The reception of the museum has been unbelievable,” Lahey said. “It has also received a great amount of international exposure. I was interviewed by a radio station in Dublin, Ireland, as well as in Belfast. Eleven artists from Ireland even came to the reception.”

Lahey, who grew up in the Bronx section of New York, has strong Irish roots throughout his ancestry. He was honored as the Grand Marshal of the NYC St. Patrick’s Day parade in 1997, and is vice chairman of the New York St. Patrick’s Day committee.

“It’s very gratifying to be able to share the collective history of the Irish people, which is my own heritage and very close to my heart, and to receive such positive and encouraging feedback,” Lahey said.

Lahey has been the driving force behind the creation of the museum, which was widely recognized and appreciated in his award as “Irish Person of the Year.” The museum is not only home to the largest collection of artifacts from the Great Hunger in the world, but also offers 19th century and contemporary art commemorating those who struggled and lost their lives during this time period.

“Many people in Ireland still struggle with the memory of the Great Hunger,” Lahey said. “If not in Ireland, I can’t think of a more perfect place to have this museum than right here in Hamden – halfway between New York and Boston, which were both transformed by the Irish culture.”

With 40 million Irish Americans living in America, Lahey says that the opening of the Great Hunger Museum has also extended Quinnipiac’s name far and wide.

“This is what Murray Lender would have wanted. Though he passed away last spring, he would have been proud to see the success of the museum,” Lahey said. “A group of young schoolchildren visited the museum this past week, and they were excited to learn about a subject they may not otherwise be studying. That alone carries more significance than anything.”

Following the success of the Great Hunger Museum, Lahey plans to continue to bring Irish culture to both Quinnipiac and Hamden. Lahey, along with the history department and the College of Arts and Sciences, are in the final stages of designing a Great Hunger Institute, where the university will be able to do in-depth research and hold conferences.

In the spring semester, visiting Irish history professor Christine Kinealy will also work with Lahey to develop courses revolving around Irish history, culture and the arts.