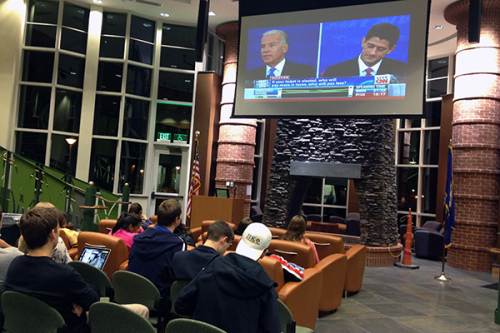 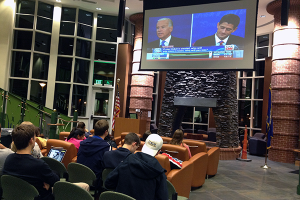 This event was more sparsely attended than the first presidential election at Rocky Top Student Center. However, students were floating in and out of the new piazza space in the Carl Hansen Student Center.

The Vice Presidential Candidates responded to questions ranging in topic from Foreign Policy to Reproductive Rights.

The atmosphere of the debate was more animated and impassioned, students said, in contrast with the first presidential debate between President Barack Obama and Governor Mitt Romney.

“It was more of a heated debate,” junior Joe Rodriguez said. “I felt like the presidential debate was more of a statement of facts and their intentions. This was more of a debate going back and forth and I really enjoyed it.”

Biden dominated the conversation throughout the debate, giving a theatrical performance; he often chuckled or guffawed as Ryan spoke, interrupted his opponent and belittled him.

It was a fun debate for lovers of politics, but it is unclear how appealing or deterring the feisty style of Biden’s performance was to the average voter watching the debate.

Many, including freshman Carly Hviding, were shocked and turned off by Biden’s aggressive behavior.

“I thought that [it] was very disrespectful,” she said of Biden’s constant laughter and interruptions. “Especially considering that Ryan was listening to him the entire time and the fact that these issues are very serious to all Americans.”

Hviding also noted that Ryan’s views on foreign policy, Medicare and Social Security, were presented more clearly, but that he “was not specific enough when it came to the [Romney/Ryan] tax plan.”

The influence of the Vice Presidential Debate on national polling numbers, if any, has yet to be determined; instant polls yielded mixed results. An instant CBS Poll after the debate suggested that Biden had taken the upper hand with 50 percent of respondents saying that he had won, 31 percent saying Ryan had won and 19 percent saying it was a tie. However, in CNN’s instant poll, Ryan led Biden by 48 percent to 44 percent.