This Is Me: Making it ‘Count’ 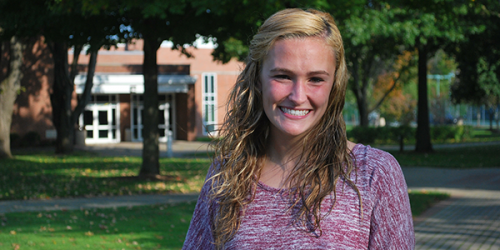 Phoebe Laplante listens intently for the phone to ring. The result of her blood test, specifically her platelet count, will determine if she can play lacrosse this week.

She’s feeling tired and hungry. These once unfamiliar symptoms have now turned into a way of life. She just needs her count to be over 50,000, then she’s good to go. If it’s under, she has to sit out practices for the week and possibly miss an important game. But right now, it’s a waiting game.

During a routine physical the summer before her senior year of high school, the Acushnet, Mass. native had her blood taken. With no prior symptoms, Laplante was diagnosed with a blood disorder, Idiopathic Thrombocytopenic Purpura, commonly known as ITP. She immediately started experimenting with treatments to combat her unknown disorder, which brought on constant exhaustion. She was a Division I lacrosse player – all she wanted was to get in the game.

“To get out of bed every single morning and to always feel tired is difficult, so it’s always like you want to have energy but you need to sleep, but you need to study but you need to practice,” Laplante said. “There’s all these ‘have tos’ that don’t really work out because you’re so fatigued from the blood disorder.”

ITP is an autoimmune disease that targets platelets, which are small blood components that help the clotting process. Her body targets platelets as foreign and eliminates them throughout her body. Because her blood has difficulty clotting, her athletic injuries and bruises are more frequent and painful.

The number of people diagnosed is difficult to determine so the estimates vary. Among Laplante’s age group, the disorder is equally prevalent in women and men; however above the age of 30, more women are diagnosed. A person that has ITP for over a year is considered chronic, and Laplante has been diagnosed for more than three years.

“I was getting huge bruises and they had no reasoning for it so that was kind of scary, but then when they figured out what it actually was, I excited that I could still play but I didn’t realize what kind of treatment I was going to have to go through until later on,” Laplante said.

The slightest hit to Laplante’s body can cause a bruise, which will eventually create a welt or even internal bleeding, something that her parents are constantly worried about. In high school, she resisted her parents’ concern.

“My mom would say ‘Phoebe, your count is 17,000. You could get hit in the arm, you could bleed and then die,’” Laplante’s older sister, Ivy Laplante, said.

In high school, Laplante refrained from telling anyone outside her immediate family about her diagnosis. She was playing soccer, lacrosse and basketball at the time and feared that news of her diagnosis would be a blatant disadvantage to her playing. She felt hindered and embarrassed, but most of all, she didn’t want other’s perceptions of her or her athletic abilities to change.

“She didn’t want sympathy from people and she didn’t want it to inhibit her,” Ivy said. “She didn’t want people to say, ‘You shouldn’t be playing because you have this blood disorder.’ Finally, she’s realized this is who she is and you just have to embrace it.”

Looking back to when her sister was first diagnosed, Ivy, 22, who was away at school, didn’t know what to think. Their parents didn’t know how to explain the diagnosis.

“It was this constant state of ‘Wait, what? Phoebe was in the emergency last night because she had a headache that she couldn’t control?’ It was very scary,” Ivy said.

Three years later, Phoebe has adjusted to a new lifestyle. She endures weekly Complete Blood Checks (CBCs) either at Quest Diagnostics in Hamden, Conn., or at Yale-New Haven Hospital, to ensure that her blood counts are up to par. If her platelet count is more than 50,000, she can play lacrosse that week. She also goes through intravenous immunoglobulin (IVIG) infusions. Although this helps increase her blood count for months at a time, the side effects of the procedure seem to outweigh the benefits, Laplante said.

“Exactly one week after, it makes me get this terrible migraine and it’s so bad sometimes it makes me go to the hospital and get morphine,” Laplante said.

Other days when Laplante’s counts are low, or when she misses a week of treatment, she is physically exhausted. She describes a low platelet count as feeling depleted, tired, depressed and anxious.

“Its almost like you’re sick but there’s no sickness,” she said.

Considering that ITP can cause fatal bleeding, there are precautions to take when doing the most basic routine procedures, such as when Laplante had her wisdom teeth removed.

“I had to have my hematologist, and my orthodontist, the dentist and special nurses on duty just to make sure my gums would clot,” Laplante remembered.

As of two weeks ago, Laplante is now coping with another lifestyle-altering diagnosis. In her own research, she found that ITP correlates with Celiac Disease. After bringing this up to her doctor, Laplante is now gluten free.

“I am feeling better since I cut that out of my diet,” Laplante said. “But now that’s a whole other adjustment. I used to just eat a lot to keep my energy level up, and now I can’t eat what I need to eat because it has wheat or gluten in it.”

Chicken and salad have been her go-to meals, Laplante said.

Somehow, Laplante is known to manage her diagnosis with a smile, and maintains as normal a lifestyle as possible.

Warheit recalls certain practices where Laplante was visibly “out of it” and not in condition to play.

“She was feeling really nauseous, and she had to stop but you could tell she didn’t want to. She just tries to play through it,” Warheit said.

Laplante doesn’t let her condition stop her from playing the game she loves.

“I leave the worrying to my mom and just play,” Laplante said with a laugh.

Maybe it’s her so-called stubborn attitude, or her commitment to the team, but Laplante uses the support for encouragement to lead a positive, productive life. Despite all she’s been through in such a short amount of time, Laplante’s mindset is inspirational.

Going to Yale-New Haven Hospital puts things into perspective for Laplante, who said she realizes her disorder may not be as bad as she thinks.

“I’m sitting there with people that all have terminal cancer and I’m like ‘It could be way worse,’” Laplante said. “I’m coming here because I want to continue playing and continue doing what I love, so as frustrating as it is to go get your counts checked every week and to feel like absolute crap because you’re always tired, it puts it into perspective. I’m not dying, it’s going to be okay.”

According to Ivy, Laplante has always kept this outlook on anything she attempted.

“She’ll put her whole heart and soul into whatever she does, and even though she has this disorder, it’s not stopping her,” Ivy said. Ivy remembers a younger, more naïve and strong-minded Phoebe who always thought she was fine. But now, with the help of her health science courses, she has learned that her health is just as important as her team.

Laplante and a few of her teammates wait to get Laplante’s weekly blood results. She appreciates the overwhelming support she receives on a daily basis, whether that’s from her teammates or her coach, Danie Caro.

Caro has been a coach at Quinnipiac for eight years and considers Phoebe to be physically gifted and also a selfless teammate.

“What strikes me the most about Phoebe is she is incredibly concerned about her teammates and she wants to be helpful,” Caro said. “I think that is a tremendous value that she brings to the team.” Caro also referred to Laplante as the glue that holds the team together.

While Caro is understanding of Laplante’s disorder, she explains that she, too, has to find a balance between Laplante’s health and performance on the field.

“A great example is that I can be like, ‘Come on, Phoebe, you’re lazy right now!’ and meanwhile it’s not that she’s lazy, it’s that she just physically can’t give more,” Caro said.

Over the past year, Caro has seen Laplante handle her disorder with maturity. Only Caro, Warheit and close friends know about her condition. Caro and Warheit both see Laplante as a role model to the younger players, despite the sideline pain she endures.

“I want to be the doctor that has to explain it to the kids in a childish way, but also comfort the parents,” Laplante said. “When you deal with kids, you have the child aspect and the parent aspect.”

She continues to cope with her ITP by taking it day by day, she said. She does everything she can to live the way she’s always planned. She watches “Grey’s Anatomy” every Thursday with friends and loves to be with her family. She knows her health is something that sets her apart from her championship-winning teammates, but does her best to control the disorder, instead of letting it control her.