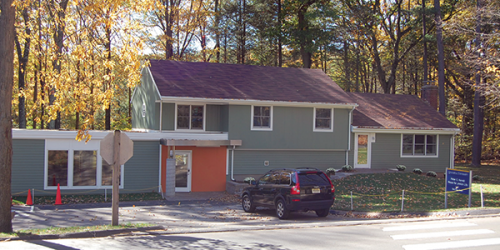 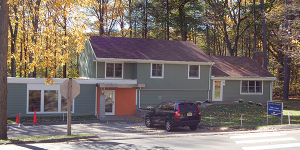 [/media-credit]Only a portion of the house was being used and needed updating, according to Vice President for Development and Alumni Affairs Donald Weinbach.

Now, the Peter C. Herald House for Jewish Life is equipped with a kitchenette, several offices, a fireplace and space for the Hillel organization to hold meetings and events, according to Vice President for Facilities and Capital Planning Sal Filardi.

“This space is a place where people can come to celebrate their faith and their heritage,” Blumenthal said.

The house was originally meant to open in September, Filardi said. However, due to factors such as weather, construction fell behind schedule.

The house was granted a temporary certificate of occupancy on Oct. 10. This allowed the building to open in time for Friday’s ceremony.

Former Hillel member and 2012 aluma Emily Lager returned to Quinnipiac for the ceremony.

“I feel like it is starting a bigger interest in Hillel,” Lager said. “There are so many people here. I wish we had this available when I was here.”

The Hillel organization has expanded significantly since its origin, Hillel’s first president Barry Beerman said. The group initially consisted of about 25 members who met in a single room.

“It is wonderful to see how Hillel has flourished,” Beerman said. “For the students to have a home here is a great opportunity.”

Beerman said he believes the Hillel members will have the greatest impact on the organization, not the building.

“I hope it becomes more of a gathering space,” Beerman said. “A place to go if students have problems or questions; but it is the people that will make it a success.”