Fraternities against the ‘F’ word 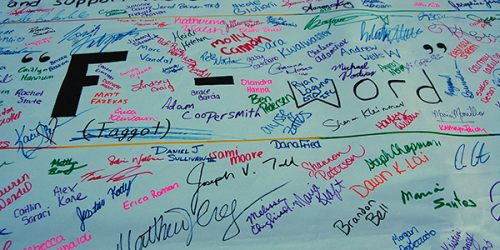 To some, Oct. 11 may seem like just another day. Yet, to others it’s a momentous day: National Coming Out Day. This year, on National Coming Out Day, Quinnipiac’s Interfraternity Council teamed up with the Gay, Lesbian, and Straight Supporters (GLASS) to hold the second annual “Fraternities Against the ‘F’ Word” to stop students from using the term “faggot.” 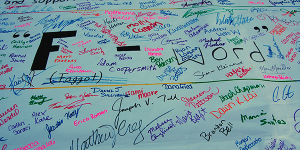 “This event is occurring because people are ignorant,” Zeta Beta Tau President Ben Mills said. “Words like ‘gay’ and ‘faggot’ are said all the time and they need to stop being said. We want to stop people from using these types of words freely.”

According to Adnan Babaic, the director of Public Relations for the Interfraternity Council, the IFC felt that National Coming Out Day would be a good day to hold the event because it will “emphasize how much our community, and Fraternities and Sororities at QU, are accepting and loving of all individuals – whether gay, lesbian, bisexual or transgender.”

To participate in Fraternities Against the “F” word, students approached the tables set up outside of the Carl Hansen Student Center. There, those who participate in a fraternity and members of GLASS would talk to the students and inform them on statistics and other information about the Gay, Lesbian, Bisexual, and Transgendered community. Then, students could sign a poster signifying that they will stop using the term “faggot” and ultimately attempt to end hatred in our diverse community.

“I think it is a great event for Quinnipiac’s Greek Life and the Quinnipiac University community at large,” Zeta Beta Tau IFC Representative Andrew Wells said. “The ‘F’ word is used too often and too loosely and this event helps show that it can be harmful and cannot be used on a regular basis.”

For GLASS President, Aimee Frier, this is a great event for the Quinnipiac community. Frier, who worked at the table and was encouraging students to sign the pledge poster, has a goal out from this event.

“I want to eradicate the ‘F’ word from speech as much as possible,” Frier said. “When people use the ‘F’ word, it hits close to home because when I hear someone say it, I take it to heart.”

Last year, MTV picked up on Quinnipiac’s “Fraternities Against the ‘F’ Word” and shared information about it with the world. On the MTV website, where the article is still published, MTV encourages the readers to take a participate in a poll asking “Are You Going to Stand Against the ‘F’ Word?” Readers have three options: “Hell yes. Using that word in any context is unacceptable,” “I’ll try to, but I’m not gonna lie, sometimes it slips out,” and “Sorry, but I’m not convinced the word is offensive.”

However, the participation at Quinnipiac is hard to ignore.

“People seem to be really excited to make a difference,” Frier said.