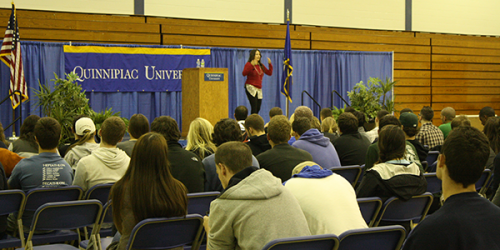 Quinnipiac welcomed back the “Intern Queen,” Lauren Berger on Tuesday night in Burt Kahn Court where she stressed the advantages of being an intern to students.

Berger succeeded to engage the audience by emphasizing tips on how to approach the application process and ways to take advantage of an opportunity. Berger’s enthusiastic narration of how she completed 15 internships throughout her college career illustrated the numerous internship possibilities available for college freshmen.

“Every opportunity was teaching me so much about myself and what I wanted to do both personally and professionally for the rest of my life,” Berger said to the audience.

Berger directed students to set themselves above the competition by completing requests within 24 hours, researching a company, and expressing interest. She advised listeners not to be discouraged by rejection but to continue to seek new opportunities and to send handwritten thank you cards after each interview.

The internship she landed her freshman year helped her develop a drive for success.  Additionally, she provided students with insight into being an intern. She described how working in a professional environment was beneficial because she received personal attention, direct supervision, and an awareness of various career paths that were available in her field.

To further encourage the benefits of internships beyond her personal success story, Berger presented statistics to support her point.

“Studies show that students with internship experience on their resumes get jobs sooner and get job offers at a higher salary,” Berger said.

Berger’s story demonstrated that a successful future is possible by putting yourself out there and taking action. She stated that her achievements were possible because of her attitude.

“I took initiative and went after what I wanted, whether it was in my internships, or in my career now,” Berger said.

Although Berger’s guidance was helpful, there was discussion among many students that the series of events that led to her success were pure luck and not a possibility for them.

“She was telling us how she achieved her dream, but wasn’t giving clear directions on how we can achieve ours,” freshman Alexandra LaMagna said.

In a discussion concerning the factor of coincidence in Berger’s story, freshman Dylan Gomez said he believed it was more than just pure luck.

“Her luck does seem farfetched, but I really think she had her stuff together, worked hard, and went after what she wanted,” Gomez said.

All in all, Berger admitted to the audience of hopeful students that anything is possible, as long as you try.