Bill Schweizer the voice of the Bobcats 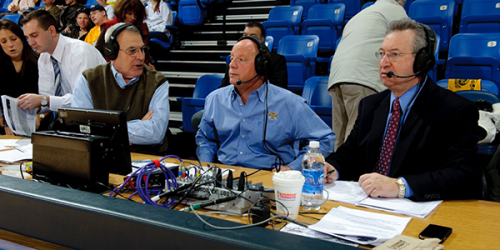 If you arrive at the High Point Solutions Arena three hours before a game, you’ll see one man in the press box. Surrounding his work space are several papers with marks and pronunciations as he continues to cross and check words. It looks like he’s calling his last game, but that’s far from true.

That man is Bill Schweizer. He’s been the voice of Quinnipiac basketball and ice hockey for 1220 AM WQUN, the Bobcats’ radio station, since 1997. Schweizer is also currently Quinnipiac’s media coordinator, which requires scheduling his own broadcasts and conducting media sessions with all the school’s athletes and coaches. He teaches a sports reporting class and gives a yearly tutorial to members of the Quinnipiac Bobcats Sports Network on professionalism.

While Schweizer has been in the business for quite some time, it wasn’t his original vocation. You can say he wanted to swing for the fences, but landed on the warning track.

The voice of Quinnipiac basketball and hockey had dreams of becoming a professional baseball player since his high school days. Right out of high school in 1966, Schweizer was called to do a tryout with the Cleveland Indians. He decided to play at Iona College for four years, while teams such as the New York Yankees, Minnesota Twins, Pittsburgh Pirates and Houston Astros showed interest. Midway through his senior year, his life took a complete 180. While playing in a game, Schweizer popped a disk in his back. Teams slowly started to back off the prospect, as he was scheduled to have surgery the last month of the season.

To make matters worse, a Cleveland Indians scout called Schweizer about drafting him. Schweizer told the Indians’ scout that he was having the surgery, which the scout followed by saying they were going to draft him the next week if he was healthy.

“I realized I had to figure out what I was going to do with the rest of my life,” Schweizer said. “I majored in English at Iona, and at that point teaching didn’t appeal to me. I saw a full-page ad in a sports magazine saying ‘YOU TOO CAN BE A BIG-TIME SPORTSCASTER.”

Being from Yonkers, N.Y., Schweizer idolized broadcasters like Marv Albert and Marty Glickman. Scweizer followed up on the ad and enrolled in a 15-week course. Ten weeks in, he was offered a job as a newscaster for WELV radio in Ellenville, N.Y.

Schweizer has been broadcasting for more than 41 years, including stops at CBS Radio in New York, UConn, New Haven Ravens baseball and Villanova during its historic 1985 men’s basketball run. That season, the Wildcats cut down the nets as a No. 8 seed in the tournament, the lowest-seeded team to ever do so, as they upset Georgetown, who was a No. 1 seed. He also covered seven Olympics and did play-by-play broadcasts for select MLB games of the week, NFL Sunday night games and NCAA basketball playoff games. 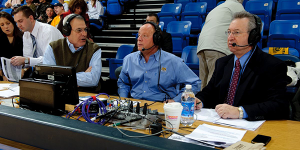 [/media-credit]
“Working with these men has been a fabulous broadcast experience as well as getting close to three guys who will be lifelong friends,” Schweizer said.
At Quinnipiac, he does a yearly seminar with members of the Quinnipiac Bobcats Sports Network to talk about his job and what it takes to become a broadcaster. The seminar is once a year on a Sunday morning for three hours and it covers aspects of being a professional, how to prepare and other criteria.

Schweizer says being a professional involves numerous aspects. The first is to remove being a fan from your persona while you’re on the call, avoiding words such as “we” or “I.” While you do that, prepare as much as you can and prepare some more. Schweizer says preparation is the key to having a good or bad broadcast.

Forty-one years and several jobs later, Schweizer is still having fun and doesn’t intend on slowing down.

“There is no sense looking back and asking ‘What If?’” Schweizer said. “As Satchel Paige once said, ‘Don’t look back … something may be gainin’ on you!’ I have no regrets … I have been very fortunate to be able to have the career I’ve had. What is there to regret?”