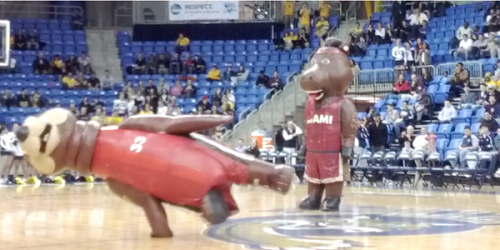 In just less than 48 hours, the Quinnipiac community will be brought together for one night at the TD Bank Sports Center to celebrate the first official practices for the basketball teams. For the 17th year, what was once called “Midnight Madness” will now be referred to as “Bobcats Madness.”

But why change the name? According to Director of Athletics and Recreation Jack McDonald, some parents took the name of the event literally. Oct. 12 at midnight is when the teams can have their first practices of the season, the event however is at 7 p.m. 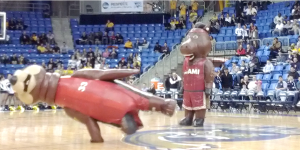 [/media-credit]
Bobcats Madness occurs yearly on Parents, Family and Homecoming Weekend and attracts not just students, faculty and athletes, but parents and families as well.

The doors open to the basketball venue at 6 p.m., but the event starts at 7 p.m. with the introduction of the spirit groups, such as the Pep Band, Sideline Cheerleading, Dance Company and the QU Spirit Group. Senior Associate Director of Athletics Billy Mecca will then take to the court for his yearly dance routine. After this, the basketball players compete in certain events to show what they have to offer for the season.

Q30 and the Quinnipiac Bobcat Sports Network will be there to cover the event. Senior co-directors of QBSN Marc Schwartz and Matthias Gausz are going to broadcast the Madness live for their respective network.
“Bobcats Madness is a time that allows fans to see what their teams will look like in the upcoming season,” Gausz said. “Here at Quinnipiac, it has grown to include all teams and be sort of a huge pep rally with a three-point competition and dunk contest.”

If you get there early enough, you might leave the arena with a gold singlet. The first 1,000 people to arrive will receive a free Quinnipiac replica basketball jersey with “Bobcats Madness” text on the back.
This year, Quinnipiac has added the Zooperstars to the mix, a fun bunch of blow-up mascots who take famous athletes and mesh them with silly animals. A few examples are Tiger Woodschuck, Mario Lemuel and Shark McGwire. They came to a couple of games last year, and do activities from racing to hilarious dance numbers.

Last year set a record attendance at Bobcats Madness, as more than 3,000 parents and students joined the yearly festivities.

“I think this year the hype is getting bigger and bigger,” Gravitte said. “We could break the record this year.”

“Bobcats Madness has always worked pretty well for me,” Schwartz said. “Maybe some sort of challenge between some of the teams would be entertaining. Like a tug-of-war, relay race or something could be fun. The dunk contest has always been a highlight and I think everyone in attendance looks forward to that.”

To commemorate the fifth-year anniversary of the TD Bank Sports Center’s opening, the 500,000th person to enter the building will coincidentally be during Bobcats Madness. That lucky winner will earn an unknown prize.

“Everyone should expect a real good time,” Schwartz said. “The point of the night is to celebrate Quinnipiac athletics, and I can think of no better way to do this than Bobcats Madness. I would love to see all of the students in attendance become enthusiastic and active after Bobcats Madness, so hopefully the night sparks some school spirit. Overall, it will be a fun, exciting night that students should not miss.”

Boomer the Bobcat, Quinnipiac’s mascot, also turns 10 years old the same day. To honor Boomer, Quinnipiac plans to show a video on the jumbotron of the bobcat’s most infamous moments, as well as a crowd unison chant of “Happy birthday.”

Expectations for the event are going to be extremely high. Gausz thinks that not only will Bobcats Madness be fun, but somehow out of control in a good way.

“They should expect a pep rally-like atmosphere with some competitions for the basketball teams, all mixed in with some controlled chaos,” Gausz said. “It’s hard to follow sometimes as it’s all over the place but it’s still a cool way to kick off the season.”