This Is Me: Teaching Freedom From Experience 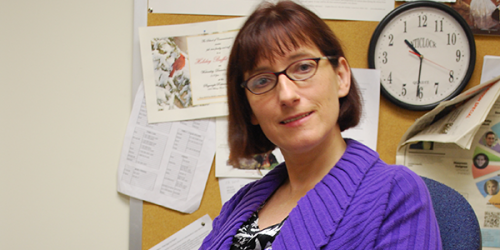 When the military threw gas bombs through the doorway of her classroom in 1988, Ewa Callahan stood alert, listening intently as her professor guided students toward a back entrance. As they were ushered through a wall, Callahan braced herself. She had to jump through and land on the street below, then run as fast as she could in the opposite direction.

As students at Jagiellonian University in Krakow, Poland, their youth made them dangerous – a risky and unknown force in need of oppression. The government disbanded any gathering of people, even in a classroom, for fear of demonstrations or protests. Police were on strict watch for signs of unity. Unity posed a potential threat. Officials paroled the streets using powerful hoses to batter down buildings and homes with little discretion, seeking to intimidate citizens.

Today this seems surreal for Callahan, an assistant professor of communications. She was a freshman in college when three decades of civil unrest climaxed in Poland, as waves of strikes erupted against the suffering economy and oppressive communist government.

Poland had been under authoritarian, communist rule since 1946, when the Soviet Union heavily influenced Poland’s elections after World War II. It wasn’t until 1980 when citizens of Poland organized into the first non-Communist, Polish trade union, called Solidarity. They had dreams of a democratic Poland.

Callahan was born and raised in Communist Poland. She lived in a one-bedroom apartment in Krakow with her parents and grandmother. When she was born, the government had allocated each citizen 10-square meters of living space. A short time later issues of national debt became obvious, and the government provided families with monthly food allotment cards and further limitation. Shoes were a luxury that came twice a year.

“In the beginning, when I was a child, everything was practically available. You could go to the stores and buy your necessities,” Callahan said. “There was nothing extravagant but you could find anything you practically needed: toothpaste, food, soap. Then when the [Martial Law] crisis came there was a very strict limitation of all the goods, so you could come to the store, and the only available thing was vinegar.”

Callahan recalls the period of Martial Law, which was active from 1981 to 1983, as one of the worst. During this time, the government restricted normal life in order to suppress political opposition. Thousands of Solidarity members were imprisoned, people couldn’t travel beyond their hometown, telephone lines were disconnected, and correspondence was searched and studied for any anti-government sentiment.

As Callahan grew older, she realized how limited her world was. At the same time, her passion for travel and history began to manifest. Even when Martial Law wasn’t in effect, people couldn’t travel outside of Poland without permission from the government. If authorized to leave the country, people could only go to countries within the Communist Bloc, including East Germany, Hungary, Bulgaria, and the Soviet Union. History lessons in school were presented through the lens of a Polish nation reeling from the pain of World War II, and the government’s presence was felt everywhere, Callahan said.

Despite this, Callahan said she felt her childhood in Krakow was lucky in the relative scheme of things. Poland’s communist reign wasn’t as strict as those in China, the Czech Republic, or the Soviet Union at the time. And as a child, she didn’t understand that she lived in poverty.

Callahan was able to attend Jagiellonian University where she studied history, specializing in education and archival studies. Established in 1934, it is the oldest university in Poland.

By the end of 1988, with a rising number of strikes and protests, Solidarity was able to begin negotiating government transition. An agreement was reached to hold free elections in June 1989, and Solidarity won. Democratic rule was put in place, and to Callahan’s relief, travel restrictions were lifted.

“I really, really wanted to travel,” Callahan said. “So the moment when Communism fell and we were actually able to get a passport, I finally got another stamp which said all countries of the world.”

Right away, Callahan and a group of friends decided to travel to Austria. With limited funds, they piled into a car and drove through what was then Czechoslovakia and into Austria.

“So we just went there to see the west: to window-shop, to see anything,” Callahan said. “I remember very vividly we crossed the border into the first town in Austria and there were all these windows with things inside, and we were looking at the colors, and the neons, and everything was so bright, and light, and all of those things we had never seen. We were standing, all four of us, looking at this window, and I can remember it to today.”

Callahan later received a grant to study the Austro-Hungarian Empire at the University of Vienna in Austria. During that time, she met her husband, Kevin Callahan, an English teacher from the U.S. They were both standing in line at the opera.

Callahan recalled a memory of their relationship, when the oppression of Communism in Poland still clung to her views of the future.

“I remember he mentioned it casually,” Callahan said. “We weren’t dating yet. He’s like ‘Oh, you can come visit me in the States,’ and I was like, ‘Yeah, you could also tell me I can come visit the moon.’ Because at this time, it was very difficult for Polish people to get a visa to the United States.”

Today, the couple is married with two children. Though there were cultural and language barriers early in their relationship, Callahan said they spoke German and broken English. In 1995, they moved to the United States.

For the past 17 years, Callahan has developed her English to near perfection, earned a Ph.D in information science at Indiana University, as well as published research in two journals: the Annual Review of Information Science and Technology, as well as the Journal of Computer-Mediated Communication.

Although Callahan’s classes at Quinnipiac are in visual and user-centered design, she is well-known for her work with the traveling QU301 program. She’s passionate about sharing her life experiences through teaching.

Callahan teaches her students about the different forms of freedom in QU301, and leads trips to Poland and the Czech Republic. Since she came to Quinnipiac in 2007, Callahan has influenced the lives of many students.

“Professor Callahan is a warm-hearted, wonderful woman who is also an excellent professor,” said Alyssa Eich, a fifth-year occupational therapy student who traveled to Poland with Callahan. “She understands her students and pushes them to know more about other cultures and ways of life. The joy she gets from teaching can be seen from miles away, and that is what is most important in a professor: knowing they truly love and care about what they do.”

Callahan encourages every student to travel abroad, for however brief the time. She said experiencing what it’s like to be on the outside of a society makes students think about what it means to be American.

Though Callahan’s students gained a lot from traveling, many said they learned just as much from Callahan.

“We all had so many questions each step of the way and she always took the time to stop what she was doing and answer our questions and tell us about her experiences,” said Jessica DiGiovanna, a senior who took Callahan’s QU301 class.

Her group was able to see the apartment Callahan lived in growing up.

Nicole Bernat, a senior on the same trip as DiGiovanni, had a significant revelation as a result of the trip.

“If it wasn’t for Professor Callahan, I never would have gotten the chance to discover my Polish roots and background,” Bernat said. Her mother, father and brother emigrated from Poland while under Communist rule. Learning about this time helped her understand the sacrifices made by her family for a better life.

“If it wasn’t for my parent’s bravery, I would not be here at Quinnipiac today and Professor Callahan’s course has opened up my eyes to realizing this,” Bernat said.

Callahan has used her life experiences to enlighten, encourage and inspire others, particularly at Quinnipiac. By encouraging her students to go beyond their community and discover the world, she’s left an unforgettable impression.