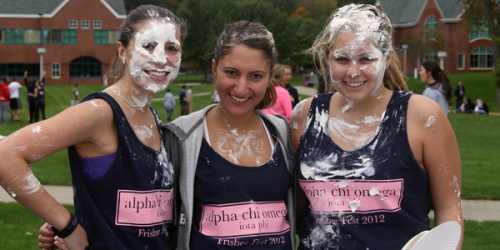 Alpha Chi Omega raised more than $30,000 in its annual Frisbee Fest on the Quad this Sunday, more than the sorority raised last year. Sigma Phi Epsilon won the ultimate frisbee tournament and had the honor to take home the Golden Frisbee. 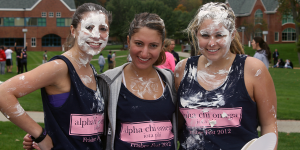 [/media-credit]The Quad went from green to purple, the color for domestic violence awareness. A popular event that occurred on the quad was “Pie an Alpha Chi,” when someone pays a dollar to pie an Alpha Chi Omega sister with whip cream.

The Quad was also filled with many events, such as a photobooth, cornhole, dunk tank, a DJ, raffles, and the ultimate frisbee tournament.

Alpha Chi Omega’s philanthropy is the fight against domestic abuse. The annual event is in memory of former student and Alpha Chi Omega sister Elizabeth Pernel, who was murdered during the summer of 1998 from a domestic violence attack. The sorority has hosted this event every year since then, according to Alpha Chi Omega President Lauren Ottulich.

“This year’s Frisbee Fest was the best one I have seen,” Joyce said. “I am pretty amazed at the turnout. There were so many teams and the rain did not seem to stop people from coming out.”

The sisters also honored former Chartwells BYOB chef, Lavern Brown, who was killed by a domestic abuse attack by his girlfriend, Rita Renee Johnson. Many Chartwells workers, as well as members of Brown’s family came to the event.

“To talk to Lavern’s family was really emotional,” Ottulich said.

To honor Brown, Pernel and all of those affected by domestic abuse, attendees were encouraged to paint their pinkie nails purple.

There were 31 teams, each consisting of eight players. Many different organizations participated in Frisbee Fest, including Greek organizations and athletics.

“It was great to see everyone and to have them support our cause,” Ottulich said.