This Is Me: The Chief’s Descendent 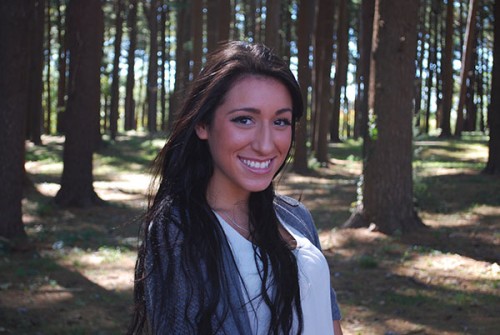 As the pounding of the drums began, the crowd went silent. Melody Red Wing wore a brilliantly colored and intricate tribal shawl as she moved to the beat of her ancestors, twirling, stomping and raising her arms. 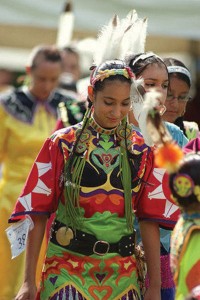 Weeks later, she sat in the student center wearing leggings and a grey striped shirt. With her head held high, she spoke the dead language of Lakota, which only people of her tribe, Oglala Sioux, know. Then she said her last name untranslated: Hupahu Sa.

Red Wing, a freshman from Clifton, N.J., is the direct descendant of Native American royalty through her father’s lineage: Chief Red Wing. He was one of the most peaceful chiefs in American history, Red Wing said. Her tribe, Oglala Sioux, is one of seven subtribes of the Lakota people, and is a part of the Great Sioux Nation. Red Wing speaks with fervor about her strong Native American heritage and her passion for tribal dancing.

Since she was a baby, Red Wing has danced with the Red Hawk Indian Arts Council, a not-for-profit organization dedicated to educating the public about Native American heritage through performance art. Her mother, Dolores, and sister, Josie, share the same hobby.

“Me and my sister are high placed in competitive dances,” Red Wing said. “My sister competes everywhere. The last place she competed was Gathering of Nations in Albuquerque, N.M., where she placed fifth out of 100 competitors.”

Red Wing is a fancy dancer, meaning she wears colorful traditional clothing called a regalia. This includes a heavy shawl that resembles butterfly wings. Her sister is a jingle dancer, and wears a regalia with rows of rolled up tobacco tins in order to make a rainfall-like sound when she moves. Her mother is a traditional dancer, who wears a plain and conventional regalia.

Red Wing said her inspiration to continue dancing comes from her mother, who is a Lipan Apache native and acts as a dancing coach. She also teaches her daughters about their heritage.

And for the Red Wing family, dancing means much more than a performance.

“I dance for those who cannot dance,” Red Wing said. “When we dance, we pray for the survival of our people and for understanding and respect from non-Natives for who we are as the original people of this land.”

Red Wing also said dancing is a celebration. People come together to keep the traditions alive.

“When I dance, I honor my ancestors and those to come, our veterans, our elders,” Red Wing said. “To dance is a prayer. It is one of the few things we still have left to us that was not taken away. We are still here, we still exist and we remain.”

Red Wing’s first name in Lakota is Sunlata Winyan, a name given to her by an unrelated elder, she said. Names are passed down, and hers came from a close friend of her mother’s.

Although her family is strongly connected to their heritage, Red Wing said it’s rare to find another native outside of the Red Hawk Indian Arts Council.

“[Native Americans] don’t really have a community,” she said. “It’s hard and really rare. In my high school, it was just me and my sister. Out of 800 kids, we were the only Native Americans.  It’s really hard community-wise. It’s all about your area.”

Keeping their heritage alive took a lot of effort from Red Wing’s mother, Dolores. She uprooted her life in New York to move to the Pine Ridge Indian Reservation, an Oglala Sioux reservation in South Dakota where roughly 40,000 Native Americans live. After years here, Dolores met another native, became pregnant, and moved back to New York to settle down.

“She knows a lot of people and has a lot of friends,” Red Wing said of her mother. “Even as kids she would take us to Pow-wows – that’s what our gatherings are called. Me and my sister both really enjoyed it. She even knows her tribe’s language. I can’t say I’m an American Indian unless I truly make myself one. My mother inspired me and taught us that we should always be in touch with who we are.”

Red Wing is enrolled in Oglala Sioux Nation, making her an official Native American. Her mother is enrolled in Lipan Apache. The process for this enrollment is a difficult one, however.

“To be in enrolled you have to go through a process that is different with each tribe and it depends on your blood quantum,” Red Wing said.

A blood quantum is the amount of native blood you have, Red Wing said, and it has to be a high amount, which is uncommon.

“It goes back to your family tree,” Red Wing said. “You not only trace your own blood, but the blood of your direct relatives, as well. Sometimes it can be difficult to determine.”

For example, the minimum amount of blood quantum required can be as little as one-thirty-second, or one great-great-great-grandparent, or as high as one-half, which would mean having one full-blooded tribal parent. Each tribe has its own rules for membership, which can vary widely.

“A lot of people like to throw in ‘Oh! I’m Native American too!’ But really, it’s so hard to judge, because when it comes down to it not many people know much about where they come from,” Red Wing said.

According to the 2010 Census, almost five million Americans identify themselves as Native American. Of those, roughly two million are enrolled in federally recognized tribes as reported by The Bureau of Indian Affairs.

Though Red Wing loves dancing, it was difficult to keep up in the beginning because of her busy schedule. Red Wing was involved with various sports during high school, as well as worked a 40-hour week as the assistant manager at a local frozen yogurt shop.

“I was a little iffy because I would always get caught up in school or with my friends,” Red Wing said. “But after a while, I jumped into it and realized this is my culture, this is my heritage, it’s all about keeping up with it because it is who you are.”

Red Wing doesn’t do any rituals out of the ordinary with the exception of sage blessings to ward away bad spirits. However, like most Native Americans, Red Wing and her family don’t celebrate Thanksgiving.

“It’s just something we don’t do,” Red Wing said. “It’s the mass murder of Indians and it’s common that Indians don’t celebrate it. It’s like celebrating a genocide.”

Red Wing said she will dance in another competition next summer. And if there is anything to take away from the Red Wing’s traditions, it’s that they’re more than a dance, culture and heritage.

“My girls have brought great pride and gratitude to me, as well as their relatives, through the dance,” Red Wing’s mother said. “It is important to all of us individually and collectively as Indian people. My girls love to dance and have educated at museums, schools, and competitively at Pow-wows with the Redhawk Native American Arts Council for many years. It is in their blood as our people have been dancing in celebration of life for thousands of years. Being Indian is not so much a culture as our way of life.”