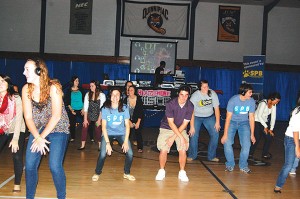 Attendees were given headphones that allowed them to switch between two channels manned by two different DJs. They played different types of music, and at one point during the event, one half of the room was dancing to Beyoncé’s “Single Ladies” while the other did the “Wobble” all in total silence.

“The event was a lot of fun,” freshman Bianca Grimshaw said. “The music selection was good and dancing around was a blast. I just really wish more people came tonight, it would have encouraged people to dance more.”

Although there was room for more people, the energy remained high, especially when a happy-go-lucky song, such as Carly Rae Jepsen’s “Call Me Maybe,” started playing. Burt Kahn went from almost total silence to a massive jam session.

“The idea of dancing around a quiet room is really interesting,” sophomore and SPB’s Culture and Diversity Chairperson, Matt Francia said. “I went to something like this in Disney World recently and loved every minute of the event, so to see something like this come to Quinnipiac is amazing.”

SPB member and attendee Allie Penta said she was really excited about the concept, as well.

“I think the whole idea of a silent dance party is amazing,” Penta said. “Being able to see people dancing around and hearing nothing but their movements and their voices singing along at times is really unique. There aren’t a lot of events like this and I really hope that it’s brought back next year.”

Between 90s Backstreet Boys and current chart toppers, as well as the switching of channels, a music environment was created that pleased everybody’s tastes and offered a chance to get completely immersed in the music.

“The DJs did a really great job with the music,” Penta said. “I really liked how there was something for everyone at one point or another. Overall the DJs allowed everyone to be exposed to a lot of different types of music which is never a bad thing.”

Despite the lack of people, Lauren Enea, president of SPB, said she was pleased with the event’s outcome.

“The DJs were really happy to be here and have been a pleasure to work with,” Enea said. “Students had been asking for a dance party that was on campus, so this was SPB’s way of giving it to them. When we gauge the success of events, we don’t determine it by how many people come, but instead the reaction of those that do, and everyone that came had a great time, so we’re really happy about it.”