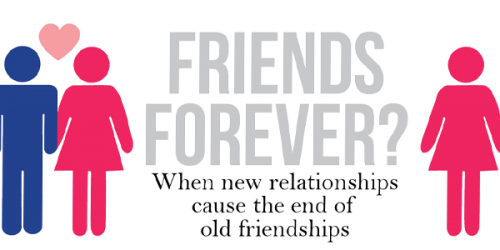 Daniella Knafo and Lana* had been best friends since the beginning of high school. They knew each other inside and out, and supported one another under any circumstance. And when Knafo lost her mother, she turned to Lana.

During their junior year of high school, Knafo introduced Lana to her cousin. The two hit it off instantly, and soon enough they were in a relationship. At first, Knafo was happy for them. She loved her friend and she loved her cousin. “What could be better?” she thought.

But as time went on, Knafo and Lana hung out less and less. When Knafo asked Lana to do something, she would already be with her boyfriend. Even when they had plans, Lana would frequently forget. Then, on the anniversary of Knafo’s mother’s death, they were going to spend the whole day together. When Knafo texted Lana to confirm their plans, she said she couldn’t because she was hanging out with her boyfriend. When Knafo reminded her of what day it was, Lana said she completely forgot.

Knafo got fed up. She confronted Lana about the way she was acting. She didn’t want to be on the back burner anymore.

Knafo, now a freshman at Quinnipiac, isn’t alone. According to research by the Institute of Cognitive and Evolutionary Anthropology at the University of Oxford, those in a new relationship lose an average of two friends, and this goes for both men and women. And while falling in love always comes with a cost, its effect on friendship usually doesn’t come to mind.

“Sometimes people become so wrapped up in the moment, especially the first few months of dating,” senior Lauren Hernandez, who began dating her boyfriend a year ago, said. “They might not even realize they’ve chosen their significant other over their friends.”

Knafo agreed, and connected it to her own experience. She said that because Lana was so happy and excited about a new boyfriend, she wanted to be with him nonstop.

“You may forget about your friends even if you don’t mean to,” Knafo said. “And then, when your friends get annoyed, you might think ‘Why are they acting like this? They should be happy for me.’”

Junior Chris Rago said he went through the same thing. When his best friend since eighth grade started dating a girl their senior year of high school, he devoted all his time to her. When Rago would ask him to hang out, he’d wait to see what his girlfriend was doing before saying yes. When he and Rago did hang out, he’d text or talk to his girlfriend the whole time. And sometimes, Rago’s friend would lie about what he was actually doing.

“I think because it was fresh he just wanted to be with her all the time,” Rago said.

Rago also said the relationship only lasted four months, and thinks it was mostly about sex.

“The friend who has been ditched might feel very used,” Michele Hoffnung, a professor of psychology said. “Instead of being a person they care about, you’re like a natural resource not a human being.”

Hoffnung said she’s witnessed people give up many things while in a new relationship, whether that’s friends, family, academics or all three. And in her experience, she tends to see women making the larger sacrifice.

And, if a person is more self-assured and confident about themselves and their relationship, this will affect how well they balance their time, Hoffnung said.

“If you feel insecure, then you’re more likely to make yourself always available,” Hoffnung said. “For instance, if a woman loves a man more than she thinks he loves her, she’s going to try to keep an eye on him.”

A person’s maturity level will also affect their ability to realize that giving everything up for a romantic partner isn’t healthy, Hoffnung said. If they are strong and clear in their values, they are more likely to maintain a balanced lifestyle.

Cutting ourselves off from friends is physically, mentally and emotionally risky. A 10-year Australian study found that older people with a large circle of friends were 22 percent less likely to die than those with fewer friends. And in 2008, Harvard researchers found that strong social ties could promote brain health as people age, as published in the American Journal of Public Health.

For women specifically, having other women friends plays an important role in controlling stress levels. A study conducted by the University of California, Los Angeles School of Medicine found that when women spend time with female friends, their bodies release oxytocin, also known as the “feel good” hormone. This helps to reduce stress, which can play a part in many problems such as headaches, high blood pressure, diabetes, depression and anxiety.

Friends can also offer a different perspective to events happening in our life, or just be there to talk it out.

“Sooner or later, even if you think you’re going to be with someone forever, that person is going to piss you off,” said senior Ilisse Gomez, who has had trouble seeing one of her closest friends this semester since her friend got a boyfriend. “So when they do, who are you going to talk to about it? If you’ve been ignoring your friends for a long time, I feel like they’ll be very reluctant to help you out. And they won’t know what’s been going on because they haven’t seen you.”

Hoffnung added that every person has needs that one person cannot meet, and because we are all complex people, confiding in one person is extremely limiting. Having friends is an important part of life because they listen and respond to you, share your experiences, give emotional support, and enjoy the same things you do. Hoffnung also reinforced the importance of perspective.

“A boyfriend doesn’t have the female perspective on things,” Hoffnung said. “He doesn’t view your relationship from your point of view, and having a friend who’s not part of that relationship can help you be sure of your own feelings. You may not want to say to your boyfriend that his friend is a jerk, but you can confide in your friend for that.”

Rago, who has been dating his girlfriend for about a year now, said it’s important to be able to do your own thing and have your partner understand. He tries to keep a balance by not making promises he can’t keep and sticking to his word. If he tells his friends he’ll hang out with them, he does, and vice versa. He also commented on the significance of having friends.

“It’s a different kind of atmosphere being with your friends,” Rago said. “We play videogames, or watch a movie and talk about things you can’t in front of your girlfriend. You also need to have friends so you don’t get tired of each other.”

While keeping a balance might be hard at first, junior Joe Rodriguez said he thinks eventually the infatuation phase will stop. For him, the most important thing in a relationship is communication.

“There shouldn’t be a choice,” Rodriguez said. “Everyone should all be on the same playing field and it’s all about communication. If you’re not communicating what you want, then there’s an issue.”

Rodriguez added that communication must be between partners, as well as friends. If he felt like a friend wasn’t making time for him, he would try and talk it out and make sure they were on the same page.

Hernandez said she maintains balance by keeping a schedule. She tries to do what she normally does with her friends, but sometimes misses a lunch, or stays in with her boyfriend one night of the weekend, for example. She also said it’s difficult at first, but since she was always trying to remain conscious of both, it became like second nature.

Hernandez tries to include her boyfriend in plans with her friends, too. That way, it’s not always a choice.

“I think that’s what makes it easier, if you incorporate the two together,” Hernandez said. “If you’re all friends, people are more understanding.”

Knafo is still best friends with Lana. Once she expressed her feelings of abandonment, she apologized, and began making time for Knafo again.

“If you value friendship before a relationship then it seems everything will work out,” Knafo said. “Don’t they say you should be friends with someone before you get into a relationship, too?”

*Name has been changed