Reunited on the pitch 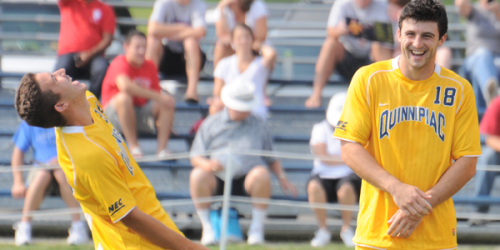 Quinnipiac midfielders Robbie McLarney and Will Cavallo head toward three cameras waiting for them just off the baseline of the soccer field. As they walk, a few teammates playfully heckle them.

“Make sure they hold hands!” one shouts at the cameraman. “End the interview with a big, old bro hug,” another suggests.

“We always say that they’re the best friends that anybody could have,” Da Costa said. “The two of them, they’re two peas in a pod.”

After three successful seasons at Rutgers, McLarney made his way to Hamden in August to obtain a masters degree in public relations. He had been highly sought after by several soccer programs, but was heavily recruited by Da Costa’s staff at the urge of his close friend.

“I’ve known Robbie since I was 6 years old,” Cavallo said. “We’ve been best friends for more than 15 years, so having him come here is crazy.”

From the time the two met in Londonderry, N.H., soccer became their commonality. Through the years, they played at various levels together, including club teams such as the New Hampshire Classics, along with the New Hampshire Storm. While McLarney would eventually move on to play on for a well-reputable squad, like the Boston Bolts, and even have a short stint in England, the two still were on the Londonderry High School team, as well.

As college rolled around, the boys knew they would likely be heading their separate ways for the first time in more than a decade. McLarney would head to New Brunswick, N.J., while Cavallo made the trip to Hamden with no soccer scholarship in hand. Yet even from afar, Cavallo still found influence in his buddy.

“I was like ‘Oh man, one of my best friends is playing Division I college soccer, that would be awesome. I wonder what that would be like,” Cavallo said.
McLarney supported his friend’s aspirations.

“I told him to go for it, see what would happen,” McLarney said.

Cavallo dreamed big. After failing to receive an offer to play for Quinnipiac, he tried out for the team prior to his freshman year. He was cut, unfavorably nonetheless. Still, he pursued and walked on for his sophomore year, giving him another year of eligibility.
[media-credit id=1459 align=”alignright” width=”300″] 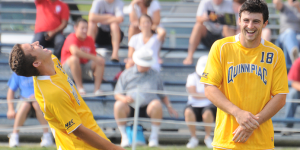 [/media-credit]
With both having found success at their respective schools, McLarney made the jump to the Northeast Conference after spending his first three seasons at Rutgers, which included a trip to the Big East Championship game in 2009. Da Costa knew he was getting a tremendous asset to the squad.

“There’s always been that talent there, he was a highly-touted recruit,” he said. “When we knew he was available, we did everything we could to get him here because I knew his impact would be immediate and his value would be immeasurable.”

His value is immeasurable because it keeps growing. In Sunday’s 3-2 conference victory over St. Francis (N.Y.), McLarney netted two goals, one of which came late in the 85th minute that ended up sealing the deal for the Bobcats. Through eight games, he has three goals and two assists, tallying eight points in total. Still, the 3-4-1 (1-0) Bobcats know there is still much to be accomplished.

“Robbie has been a good addition, as have all the newcomers, and I think we got a good squad,” Cavallo said. “Obviously we’ve struggled over the last couple games, but now’s the time to ramp it up. We’ve got conference play where all the points matter.”

What exactly was it like stepping on to the same pitch as one another for the first time in five years though?

“Seeing Robbie out on the field for the first time, I was defending him, and I said, ‘This can’t be real, this is like high school. It still boggles my mind,’” Cavallo said with a smile.

“I’ve known this guy since he was 6, so it brings back a lot of memories,” McLarney said. “It’s pretty cool.”

He also added that he has had little difficulty adjusting to the new system and style of play in the NEC, and has enjoyed his tenure at the school thus far.
So how well do the two know each other? The only way to find out would be through a series of tests. When asked what Cavallo’s favorite movie of all-time was, McLarney responded with “Batman.”

“Batman’s up there, but I’d have to say ‘Shawshank Redemption,’” Cavallo said.

Despite the slow start, McLarney quickly rebounded after he correctly named his friend’s favorite musical artist.
“It’s got to be Snoop Dogg,” he said confidently.

“Snoop is definitely up there, I’d have to say he’s my favorite,” Cavallo said back. “Freshman year, I would sing ‘Gin and Juice’ everyday.”
Cavallo was sharper in his response, concerning McLarney’s favorite food.

“I’d say he’s a plain pasta guy. He likes his different sauces, but pasta is what he enjoys,” he said. McLarney confirmed it with a smile.
The two looked at one another and simultaneously broke into laughter as they embraced the ridiculous nature of the conversation. It is this unique dynamic, however, that Da Costa says does much more good than it does harm.

“They’re interesting characters,” the eighth-year coach said. “Will has always been phenomenal for our program and for the chemistry of our program. As a team guy, there’s nobody better than him.”

And McLarney? Da Costa believes he’s the cherry on top.

“Add in Robbie,” he said, “the two of them are really good friends, and it spills over to the rest of the team.”

When the two Londonderry natives look back at their final seasons of collegiate ball, they will be able to do so knowing they spent it alongside their best friend.

“It brings back all the memories from 6 through 18, “ Cavallo said. “You can’t replace those, and bringing them back into your mind is just fantastic.”

But as the two concluded the interview, still drenched in sweat from practice, Cavallo motioned back over to his buddy.
“We forgot to hold hands,” he said laughing.