Capoiera Dance Performance came to Burt Kahn Court for an interactive demonstration of the martial arts. Students watched, participated and learned about the spiritual dance in honor of Diversity Week. 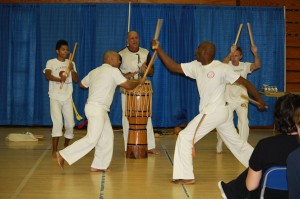 Capoiera is a mixture of African dance and martial arts that is based on respect, strength and ability. It was created by African slaves living in Brazil, and initially practiced to defend slaves against slave owners. But when the authorities caught on to this phenomenon, slaves disguised it with dancing. Even though Capoiera is a martial art, it’s not called “fighting,” but instead a game. The players have their own identities, which distinguish them from their everyday lives. The rhythm of the music played determines the speed of the game.

Anthony “Espiritu” Baker, a senior at Purchase College, was a player in last week’s demonstration. Beginning four semesters ago, Baker made it clear that Capoiera is much more than a martial art.

“There’s a whole culture behind [Capoiera],” Baker said. “It’s a living, breathing thing, instead of just being a martial art, which is why it is so appealing to me.”

“I didn’t start getting into Capoiera until I started training for a Brazilian tournament. Then I started to learn the language and the rhythm,” she said.

Thomas added that the culture is the biggest part. People love to see the flash, flips and acrobatics, but the culture and the music is what drives Capoiera.

“There’s a rhythm and a spirit behind it that you don’t get from other martial arts,” Thomas said. “It’s based on you as a person and how you feel at that moment, so it brings those things out of you that other martial arts don’t bring out.”

Students were asked to participate in this cultural experience, by joining the Capoiera players in a few games.

Freshman Gabriella Morales was an active participant and raved about her experience.

“I thought it was a unique perspective on diversity,” Stolz said. “It was a great mixture of cultural knowledge and fun. I had a lot of fun.”