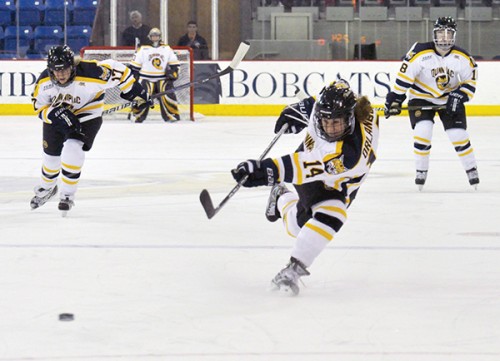 For a Division I athlete, keeping up with schoolwork and playing on the team all year long can become a drain on one’s body. But what about playing two sports in one year?

Elena Orlando knows all about that.

“It takes a bit more time than I’m used to, but it teaches you more about time management,” Orlando said. “Obviously I met a lot of new people, I get more involved in the school, I kind of get a new perspective on it.” 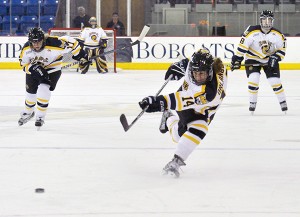 [/media-credit]Orlando, a junior from Winters, Calif. was originally recruited by Quinnipiac to play women’s ice hockey, beginning in the 2010-2011 season. Before coming to Hamden, Orlando led her high school team, Shattuck-St. Mary’s, to a national championship in 2009 and as runner-up in 2010.

In her first year at Quinnipiac, the forward played in 33 games, recording two goals and six assists. Last season, Orlando notched one goal and two assists in 18 games played.

Yet, beginning in fall of 2011, Orlando attended occasional women’s rugby games throughout Quinnipiac’s inaugural season, and immediately took interest in the sport. She was later contacted with the opportunity to play collegiate rugby in spring of 2012.

“I saw some of their games and was really interested, I wanted to check it out,” Orlando said. “I’d seen some [rugby games] in the past, but I really didn’t know much about it until I came here. When I saw their games last year, I really learned a lot about it.”

Orlando debuted for women’s rugby in 2012, playing winger, and will continue with both sports as they overlap this fall. This year, women’s rugby is so far undefeated, three of its four wins coming via large victories. Women’s ice hockey will begin its season on Saturday vs. Cambridge.

“Elena has exceptional athletic ability,” Quinnipiac women’s ice hockey head coach Rick Seeley said. “Her speed, quickness and fluidity apply to all sports. She has a great attitude and is open to change and adjustment. These attributes have all contributed to a smooth transition to the rugby team. We look forward to Elena joining our team at the end of her rugby season. We fully expect this to be her best season so far.”

In playing two of the most physical sports around, Orlando didn’t have much trouble adjusting to the toll rugby and hockey can take on one’s body, and is something she recommends trying.

“It was a little bit difficult to learn a new sport, but you learn how to adjust to that. I’m an athlete, so it wasn’t that bad to make the adjustment,” Orlando said. “I love both my teams, they’re both really supportive.”

Yet, when picking a favorite between the two, Orlando has a tough time choosing.

“It’s tough now, I like both of them. They’re both different, they have their pros and cons,” Orlando said. “They’re both a lot of fun.”